You know how sometimes the kids are arguing and fussing and you spend a second or two wondering why you thought it would be a good idea to have more than one child? That didn’t happen last night. Instead, I had one of those sweet moments when you can only be proud of your kids and know they’ll look back and remember the good times together.

Jeffrey turned on the Wii and of course Bennett wanted to play. One of the controllers had a dead battery. Jeffrey had been trying to get one of us to perform the minor surgery involved in replacing the batteries in a Wii remote, but he decided suddenly that dead batteries were a good thing. I had turned my brain off for the night and was only halfway paying attention to what they were doing. They were playing Mario Kart and I could see them both in the playroom, sitting side-by-side on the little couch, steering as if their lives depended on it.

Then Jeffrey yelled, “Bennett got fourth place! I got twelfth!” Sadly, that’s pretty typical of Jeffrey’s finishes in Mario Kart. Give him a character game like Lego Indiana Jones and he can beat it in two days (or less), but racing games aren’t his thing. So I really didn’t think much about it. I figured Bennett’s finish was just a fluke. After the third time Jeffrey exclaimed over Bennett’s brilliant finish and made sure Bennett knew what a great player he is, Jeffrey came over and whispered to me that Bennett wasn’t actually playing; the batteries were dead. Bennett thought he was playing (and winning), Jeffrey was able to play his game without interference from his little brother (because he already had enough people trying to run over him), and they were having a blast together. It was very sweet.

Of course, at some point, Bennett is going to realize he’s not really playing, but I’ll let Jeffrey deal with that when it happens. They don’t really play the Wii often enough for it to be an issue.

, sixteen-year-old Jacob has always had a special relationship with his grandfather, so he’s devastated when his grandfather dies. He persuades his parents to let him go to England to see the orphanage where his grandfather grew up so he can finally escape the depression. When he finds the old house, it’s a bombed, rotted, empty mess… But things aren’t always what they seem…

I’ve pretty much drifted away from the horror genre over the past few years, so I probably wouldn’t have picked up this book on my own. (Although I did enter to win it from Goodreads, and I have no clue why.) However, I am so glad I won it and read it. The summary of the book sounds as if you’re picking up a book that will give you nightmares. That’s not the case at all. There are some monsters, so it’s not a book for small children, but it’s not terrifying, either.

This YA Fantasy is one of the best books I’ve read in a while. The pace was great; the characters, who had the potential to be something horrible, were actually fun; and I actually have no complaints about the way the story ended, although it is a bit of a cliff-hanger. This seems to be the first book in a planned series. Apparently, there is also a movie in the works.

In my opinion, the best part of the book is the photographs. The author used authentic vintage photos of “peculiar” children. Not that I’d want to sit around staring at the pictures (some of them are pretty creepy), but it’s a special touch that just adds another reason to go get this book.
I received this book for free in exchange for a review. All opinions are my own.

Laurel is a young wizard who is sent away from her aunt’s house to gain control of her magic before she burns something down. Her uncle (the aunt’s brother, not her husband) is a great wizard and while he can teach Laurel to control her magic, he doesn’t manage to teach her any personal self-discipline. The book is full of Laurel’s bad choices that endanger or emotionally hurt other people.

This book took me a while to get into. In fact, I pushed myself to get to page 29, where I stayed for a month and a half before picked it back up. Once I started it back, though, I finished it one day. I’m not sure if it’s something about the book itself that didn’t hold my interest or if I had just OD’ed on fantasy books before I started this one.

At first, I liked Laurel and was on her side against her controlling, social-climbing aunt, but by the end of the book, I didn’t like her much.

I didn’t find out until I’d finished this book that it’s the second in a series. The first book, The Wizard’s Son

is about Laurel’s cousin Orlan. If you’ve read any of my reviews, you know that I hate to read books out of order. In this case, though, I won’t be bothering to read The Wizard’s Son. Maiden in Light

just didn’t draw me in enough. The middle of the story was great, but instead of taking either of the expected directions for the story, the author takes an unexpected third and the story goes off on a tangent from there. I don’t like to post spoilers, but I don’t think this is a spoiler; more of a correction. The blurb on the back of the book makes it sound like this is a bit of a romance, but it’s really not.

The author may have plans for the next book that make sense of the choices in this one, but this reader won’t bother to find out.

I received this book for free from the publisher in exchange for a review. All opinions are my own.

Jack was explaining the “rules of hide and seek” to Blake this morning.
For Hiders
1. Don’t tell everyone where you’re hiding. (Blake likes to announce his location.)
2. Don’t just curl up somewhere. Just because you can’t see someone doesn’t mean they can’t see you.
3. If you’re not sure if you can hide somewhere, ask somebody. (The “somebody” could possibly be your pet sea turtle, but I may have misunderstood.)
For Seekers
4. You have to count all the way to 10. (I’m assuming Blake was skipping numbers along the way.)
5. You can’t look for someone where they wouldn’t be. (Like in the trash can.)
6. Don’t accidentally sit on someone who might be hiding under a chair. (If you knew my children, you wouldn’t even wonder.)
7. If you’re looking for a really weird person, you can ignore Rule #5.

Apparently Jack was following all the Hiding rules because a few minutes later, Bennett came to me almost in tears because, “I think me lost Jack.”

He had me “lost” last night. We were in bed, reading, when he said, “I put my foot under me so I not leak in the bed.” First I had to figure out that “foot” wasn’t “book” and “leak” wasn’t “sleep” or “read”. Even after deciphering that, it still didn’t make sense. Still doesn’t, partly because it’s been a long time since his diaper leaked while he was sleeping. And partly because that’s just weird.

Like most toddlers, he’s curious about everything. He has a pretty good grasp on numbers and letters, but he’ll still point to them sometimes and ask, “What it called?” He also asks about just about everything else he sees. At least he doesn’t ask, “What kind of two?”

The Heart of Hannen

I haven’t read a horror (I guess you can call it Dark Fantasy, but it’s pretty much the same thing) novel in a long time, and I kept expecting things to be “happy” and that didn’t happen much in this book. This book is well-written and I’m looking forward to reading the next book to see what happens next, because even though there was a pretty major twist that wasn’t fully explained, I’m not really sure where the plot can go from here. It’ll be interesting to see.

Update 6/27/11: It *was* all explained. I asked Ms. Bonning about it and she (kindly) reminded me of all the clues in the story that I didn’t put together. I’m still looking forward to the second book. 🙂

There is a glossary at the end of the book for the Atriian language. You’ll need it. Some of the words are intuitive and it’s pretty easy to pick up the language once you see the words a few times, but you don’t want to try to read this book without the glossary.

This book does contain some sex (though it’s not the focus of the book) and a lot of blood and violence.

Departures contains two stories from Robin Jones Gunn’s popular series. “Now Boarding at Gate 10” finds Christy Miller after high school graduation, on a family trip to Wisconsin. “In the Event of a Water Landing” is part of the Sierra Jensen series.

I had never read anything by Gunn and did not realize that these stories were each part of a series. Someone who has read the other books would probably like this one. I don’t like to read books out of order, but with some books, you can do that and still have an idea of what’s going on. These two stories are okay as stand-alone stories, but for the most part, I think you should skip this book unless you’re a fan of Gunn’s other books.

“Now Boarding at Gate 10” felt as if it were missing too much information. I just didn’t know any of the back-story and I felt like I was playing catch-up through the whole thing. After reading Departures, I looked online and apparently Christy and Todd had dated for a few years. Knowing that (and possibly other things I don’t know that I don’t know) would have made the story flow better for me. This is why I really dislike reading books out of order.

I’m trying to remember how weird my friends and I were at 15, because from the perspective of a 35-year-old, I don’t really like Sierra Jensen or her friend Jana. Jana has picked this summer to “grow up” and start dating and Sierra isn’t sure she’s ready for that yet. Which is great. She’s reading her Bible and lecturing her friend… then doing the same things she doesn’t like to see Jana doing. She figures it out in the end, but I didn’t enjoy reading it.

You can read the first chapter of the book here.

Rank this review for a chance to win a copy of Departures.

I received this book for free from WaterBrook Multnomah Publishing Group for this review. 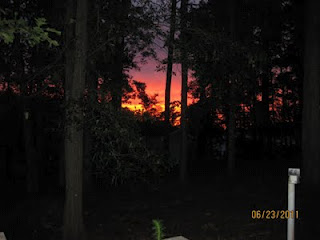 The view from our back porch last night.