I’m still in the process of writing a post about our camping trip. Meanwhile, we had a school paper due about “a special day”. So we picked one chock-full of interesting things. He’s actually combined some things from all three days into one day. Most of this happened on one day, though. He said I could post it, but I couldn’t put his name on it. So here is a condensed version of our camping trip written by my ten-year-old son who shall remain nameless. (He wanted the title in big blue letters, but I couldn’t let him do that on his actual paper.) END_OF_DOCUMENT_TOKEN_TO_BE_REPLACED

We picked a very hot day, so most of the poor animals were hiding. There was also some major construction going on, so a few of the animals weren’t on display. Including the “libra” and the “wino”. Yeah, zebra and rhino just isn’t as much fun. END_OF_DOCUMENT_TOKEN_TO_BE_REPLACED 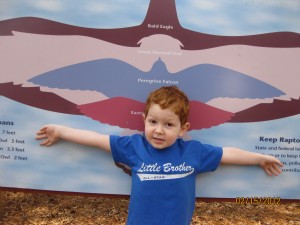 Bennett is a short peregrine falcon.

Every year, Callaway Gardens offers free admission during the months of January and February. This is our fourth year to take advantage of the deal, and as Bennett grows, you can imagine how different each year’s visit is from the previous years. END_OF_DOCUMENT_TOKEN_TO_BE_REPLACED

Last Tuesday, I posted some pictures of a tree in our yard that was broken and leaning on some other trees. Well, it lasted a little over a week. Today, the boys and I heard a big thump, and I went outside to check the roof. I didn’t see anything up there. I didn’t even think about the tree in the back yard. Jay noticed it when he got home. It’s kind of hard to miss…unless you’re looking for tree limbs on the roof. That’s a lot of tree. But it broke apart and didn’t fall on the fence. So, yay! 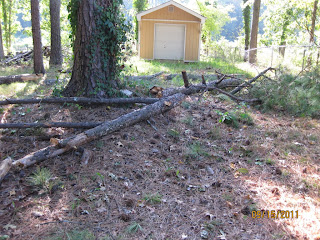 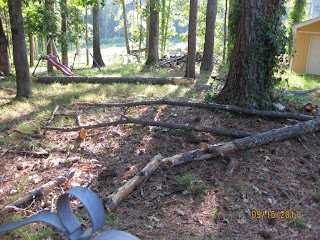 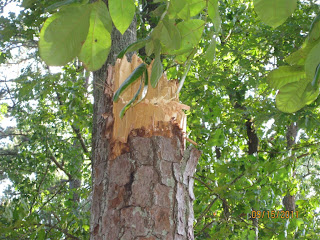 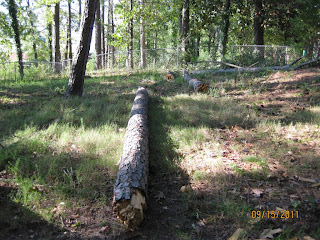 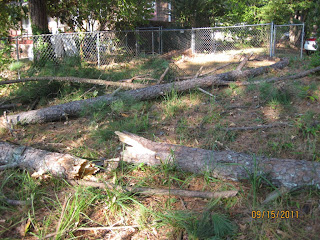 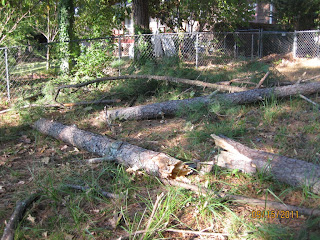 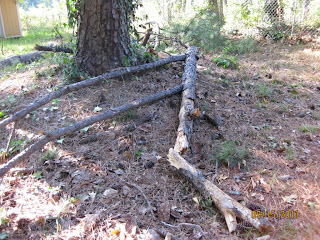 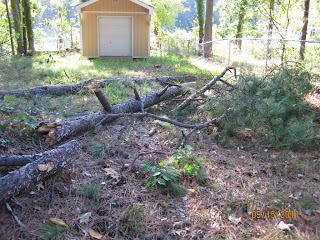 A few weeks ago, Jack asked me if he could plant flowers. Since we can’t seem to get around to planting any in the yard, when I ran across some little one-dollar kits at Target, I bought a few. They came with cute little terra-cotta pots, a little dirt pellet that expanded like you wouldn’t believe when it got wet (it was very cool!) and a packet of seeds. You can see what I’m talking about at http://www.buzzyseeds.com. I got Morning Glories, Forget-Me-Nots, tomatoes (Moneymaker breed if you’re interested), thyme, parsley (curl), and daisies. We quickly had to move the plants from the cute little pots to bigger pots on the back porch.

I had to move the morning glories pretty quickly to the ground. Those suckers grow fast! I guess I should mention that I’ve never been a plant person and I’ve never done more than help after someone else planted veggies in a garden.

I set the empty pot in the corner of the back porch/deck. It was kind of a holding pen for our little garden shovel and rake. Today, Jack and I went out to water the plants. Jack said something along the lines of, “There’s something in the pot!” At first glance, I thought it was a small snake. I wasn’t happy, but I’m proud to report I didn’t panic. Then I realized it was a lizard, or maybe a salamander. No, it was actually three of them! They were just in there hanging out. Jack had his little spray bottle that he uses to water the plants and he was spraying into the pot. I kept telling him to leave the lizards alone, but he is a little boy. I actually meant more of “quit aggravating the poor things”.

I took a picture with my cell phone, then came inside to load it on the computer. I went back out for something and Jack had removed everything from the pot except the lizards. I asked him why and he said it was so they couldn’t climb out. Since I could see them much better, I took another picture. After going back in, I heard a loud noise and saw Jack by the pot on the deck. I went out to see what he was doing to the poor creatures. He dumped them out of the pot. They didn’t have anything to eat in there. He also was upset that they left dirty footprints in the bottom of the pot. Of course, the footprints were because he had sprayed water into the pot. So much for the cool experiment of catching bugs and getting frustrated when the already-satiated reptiles ignored our offerings.

Then Jack came in and made me three lizards out of Silly Putty so I can remember our little visitors every time I see them. Then he asked me, “Do you love me really much now?” I told him, “I always love you really much.” He said, “Great! Thanks!” and ran off to watch Johnny Quest.