I'm a little snarky, with a weird sense of humor, so if you read something and think, "Was that supposed to be funny?" the answer is probably yes. Everything is funnier in my head.

I have not taken this course, but I have known Mandie for years and I trust that she has put together an amazing course that will be worth your time and investment. This is not an affiliate post. I’m sharing because I’m a single homeschooling mom and I’m able to stay home with my boys because of my work as a Virtual Assistant. I would love for everyone to have the same freedom! Be sure to grab the code below to get $50 off. — Amanda

In 4 weeks, you could be living your dream –

working from home as a virtual assistant to authors, bloggers, and small businesses!

Use easy to learn skills or things you already know how to do!

Are YOU In Love With Your Job?

What a weird thing to ask – are you in love with your job. We get it. We didn’t think we could love WORK either, but we do.

And we want you to love what you do, as well.

There are so many benefits to working from home full-time or part-time, or pushing a side-hustle to pay off bills.

Read the pros and cons of working from home

So it’s been two-ish years since I last wrote a post for this blog. (I do write occasional homeschool-related posts for TheHomeschoolMom.com.) I have so many ideas for posts, and so little time. I have a few ideas for quick and easy posts to get me back in the habit of writing. Real posts may still be few and far between, but we’ll see how it goes.

I’ve been listening to podcasts since January or February of this year, and I’ve found so many I’d love to share with others. I thought this would be a fun way to do it.

Just a warning: I have a ridiculous sense of curiosity and am rarely offended, so topics and family-friendliness will vary widely.

This Week in History With Kevin And Benedict
Kevin and Benedict provide a 20-minute history lesson of a specific event that happened…well, “this week in history.” It’s not complicated. They claim it’s more serious than their news podcast (I haven’t gotten to that one yet), but it’s still pretty entertaining, although they do treat serious subjects with the appropriate gravity. (For the most part.) You might be able to use this podcast as a jumping off point for a little history research, but I’d suggest listening to it first to see if it’s appropriate for your family.

American Scandal
The stories behind our country’s biggest scandals. This is a new-ish podcast, so there haven’t been a lot of episodes, but they kicked off with a series about the BALCO/Barry Bonds steroid scandal of the 90s & 2000s. None of which I had heard anything at all about because I don’t watch the news, I don’t care about professional sports, and Facebook wasn’t a thing yet. They ended the series with an interview with the two reporters who covered the story and went to prison for refusing to disclose their sources. (They’re out of prison now.)

Lakefront Pagan Voice
I think I mostly just love Scarlet’s voice. She has the best radio voice ever. But she’s also just funny and clever and I enjoy the way she discusses various topics. As with the other two shows, the title is pretty explanatory. From her podcast page: “I’m Scarlet, an eclectic pagan living in Milwaukee, WI, next to beautiful Lake Michigan. Join me for discussions on pagan topics and more.” If discussions of wicca, tarot, and the occasional ghost bother you, I’d suggest skipping this one. She does talk about other subjects, but it is a pagan podcast.

Podcast Addict
Not a podcast, but the most fabulous podcast app. It’s free, with full functionality (and there are SO MANY functions!), but I actually paid for it because it’s amazing and I want the developer to keep working on it. It’s only available on Android, so iPhone users are stuck with your crappy iTunes Podcast or whatever they’re calling it now that they screwed it up. I don’t have a good recommendation because my favorite iPhone-using podcast fan hasn’t found one he likes yet. But if you have an Android and you haven’t discovered Podcast Addict yet, I encourage you to check it out.

I’m fascinated by numerous topics and I love to learn, and there are still ~220 podcasts in my queue on Podcast Addict that I haven’t gotten to yet. That’s 41,668 episodes as of right now. I’m trying desperately to restrain myself from adding new podcasts until I get to a manageable number (I also don’t know if Podcast Addict has a limit), but I’d love to hear your podcast recommendations. Leave them in the comments here (not on Facebook where they’ll get lost) so I can come back and find them when I need new shows. 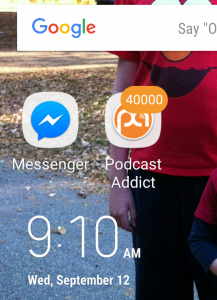 I just happened to catch it when I had exactly 40,000 unplayed episodes

I’m excited to be participating in the #BigBookGiveaway organized by Donna at Girl Who Reads! Donna has collected more than 20 paperback books from authors and publishers and you have the opportunity to win a box full! With a wide variety of authors and genres, you’ll find a new favorite, and if all else fails, you have gifts for upcoming events. 😉 (Sorry, international friends. Because of shipping costs, this giveaway is only open to those with a U.S. shipping address.)

If YA isn’t your thing, I’m featuring Silent Slaughter by C.E. Lawrence over on My Other Book Blog.

Seventeen-year-old Elaan Woodson was supposed to be one of the lucky ones. She got one of the few spots in the subterranean protection unit designed to keep select families safe from the deadly virus ravaging the world above.

She’s found happiness in the routine underground, and even a budding a romance with a boy who’s also down below.

The truth may be the only thing that can keep Elaan safe. But, can she discover it in time?

(This is part one of the series. Read more in book two, Exposed.)

Narrator: Join us as we go on a search for light.
B: You can come to our house. There’s a light right there.

B was pretending to pant like a dog.
J: Blake, stop, you’ll give yourself a heart attack.
B laughs.
J: Seriously. You’ll hyperventilate and raise your bloodlesterol.

B: You know, there are some people who don’t believe in God, Jesus, or Santa Claus.
Me: Well, belief is a very personal thing. Everyone is allowed to believe what they want based on their experience and knowledge. As you get older, you’ll learn more things–
B: And find out they’re real.

We were talking about Krampus today, and I’m not quite sure how this works, but apparently Santa is real and Krampus is not.

The kids are talking about the Harry Potter movies.
B: Didn’t they all get kids at the end?
Like they all just stopped by the store for kids or something….

B: Mama, can I show you something?
Me: Do I have to get up?
B: Sadly, you do. END_OF_DOCUMENT_TOKEN_TO_BE_REPLACED

B: Do you know what a fraud is?
Me, not sure I was hearing what he was saying: Fraud?
B: Yeah. You know what it means, don’t you?
Me, curious: What does it mean?
B: It’s like if you get a magic wand out of a cereal box, and try to make a wish, it’s not going to work because it’s fake.
Me: Yes, it is.
B: So are wishbones.
‪#‎lifelessons‬ from Blake: Cereal-box magic wands and wishbones are frauds.

B: Beg my pardon. Can you come help me?

I’ve been giving Blake 1mg of melatonin for a while. It doesn’t help Jack. I finally remembered to get a bottle of 3mg, and Jack had one last night.
Me: Did the 3mg melatonin work better? There’s also a 5mg.
J: Not really. I think we need to try the 5mg. If that doesn’t work, I need an elephant tranquilizer.

B was trying to be sad, but he walked down the stairs half-smiling. Seeing him smile made me smile.
B: stop smiling! It’s cautious.
Me: Contagious.
B: it’s infective.
A minute later: B: I can’t stop laughing. Someone control me. No one can control me. I’m a wild beast. END_OF_DOCUMENT_TOKEN_TO_BE_REPLACED