Really, it was only six days, but who’s counting? Bennett’s third birthday was this weekend, but Jeffrey really likes to celebrate stuff (which is how we ended up having an all-day “Yay! It’s Summer!” Party on June 21) so he started celebrating Bennett’s birthday on Wednesday. He decided a Varsity hat made a good birthday hat, so Bennett wore that for several days. 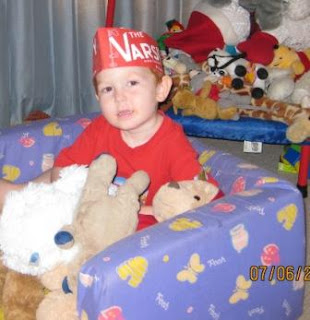 At one point, Jeffrey announced, “It’s a birthday banana!”
Very cleverly, I replied, “Um, what?”
“Wait. I think I mean bonanza.”

There was a little confusion involved in the extended celebration. We went to Toys R Us on Thursday to see what could be seen and make a mini-wishlist. While we were in the store, an associate made an announcement about a little girl who was in the store (apparently a member of the Geoffrey Birthday Club thing) who was having a birthday on that day. She signed off with, “Happy birthday!” Bennett yelled, “Thank you!” Which is just odd because his usual response when someone says, “Happy birthday!” is “Happy birthday!” 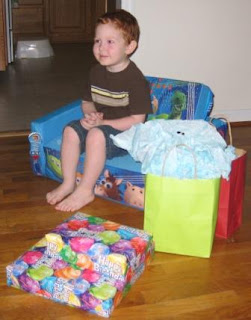 You’d think that by the time we actually got around to the birthday, they’d both be tired of it, but no. Bennett walked around all day, saying, “I’m three,” and “I’m Birthday Boy.” In fact, I made the mistake of calling him, “my big boy.”
“Mama! I Birthday Boy!”

His brother and sister-in-law came over and brought some much-appreciated dinosaurs and a very cool two-sided dinosaur puzzle. We got him a V-Tech Bugsby pen to go with a book he’d gotten for Christmas. He LOVES that pen. The first thing he said when he woke up yesterday was, “Where my Wubbzy book and pen?” Uh, yeah, it probably helps that it’s Wubbzy. 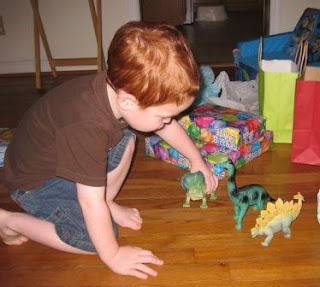 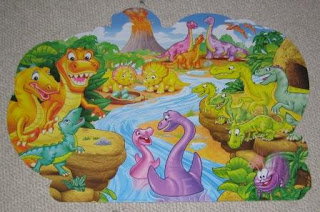 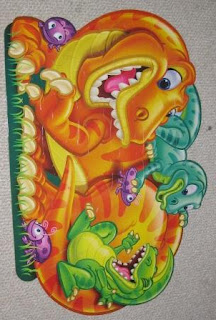