So, the latest time-wasting trend to sweep Facebook (as if you’re not wasting enough time if you’re on Facebook in the first place) is Candy Crush Saga. I resisted for months because I already played Bejeweled Blitz and who needs another time-sucking game?

Then my kids spent a week with their dad and it rained all week, so rather than being anything remotely resembling productive, I read books and played computer games all week. In other words, I took a vacation. I was so bored “vacationing” that I started playing Candy Crush Saga.

Apparently some kid is trying to help unicorns and bunnies and dragons. Who cares about all that stuff?

Let’s talk about the real saga of Candy Crush.

First, you start playing and it’s all so easy, and you can’t figure out what your friends are talking about. You replay levels just so you can get three stars. 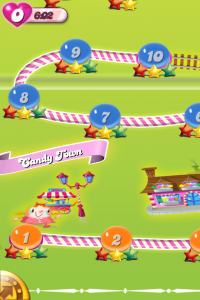 Woo hoo! I got three stars!

Then it starts getting a little harder, and you no longer care about getting three stars. You’re just happy to survive to play the next level. 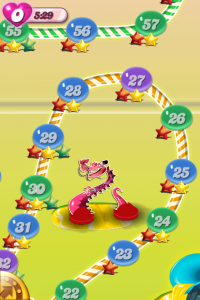 I survived! Someone get me a medal!

Oh, they throw in a few easy levels, even as you get higher. You know why? So you don’t throw in the towel. Or throw your electronic device out the window. Just as you get ready to quit, you hit an easy level. Video game developers aren’t stupid. Particularly those whose games have in-app purchases. The easy levels are like the free hit a drug dealer gives an unsuspecting party-goer to tease him and keep him coming back. Eventually, you will pay.

But first, you get a lot of these. Because nothing says fun like being told over and over that you’re a failure. 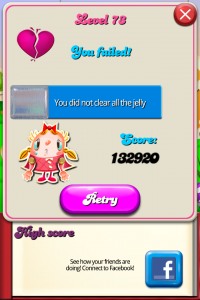 Then you hit Level 51. Which is obviously the brainchild of some demented developer. In what world does chocolate become the predator? 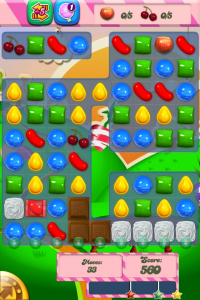 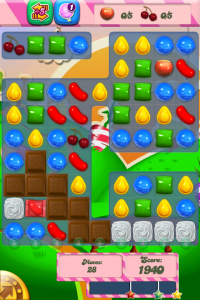 It’s like an antelope attacking a lion. It’s just not natural.

Then you hit Level 65, which is the end of the world in Candy Crush Saga. I know people who have been stuck on Level 65 for months. It’s the black hole of Facebook games. I don’t have my phone app linked to my Facebook account, so I’m playing at two different levels. I beat Level 65 in two days on my phone; I beat in a week on my computer. It was pure luck both times, I assure you. First I got a lot of these: 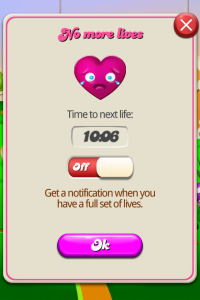 This is what you see when you don’t have the option of begging friends for help.

So why do I keep playing? Because I’m insane and it’s challenging, and when I beat a new level, I look like this: 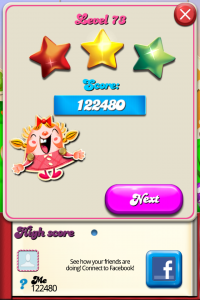