Technically, this could be Part .5 and Part 1. You know, like a little prequel.

It has rained almost every day this summer. We have a pool for the first time ever, and we were only able to use it four or five times because the weather just won’t let up. Bennett wanted to go to the pool on his birthday. I checked the radar. Nothing there. Checked the forecast. Nothing until late in the afternoon. So around one o’clock, we step out the door, already sunscreened and ready to go — and it starts raining. Check the radar again. Nothing. It’s not storming, so we went to the pool anyway, and it stopped after a few minutes, but really? Poor Bennett still hasn’t had a birthday party this year because we planned to have it at the park and we couldn’t work it out on a day when it wasn’t raining. (The Atlanta area has already received more rain this year than we get in a average year.) Fortunately, so many other things have been going on that I think he’s forgotten about it.

So, in mid-July, when we had the opportunity to go to Daytona Beach for only the cost of gas and food (free for me!) we took it. I had some reservations, because I didn’t really want to spend a whole week with my ex, but I’ve never been to Florida (I’ve been to the beach in Charleston and Myrtle Beach, and seen the ocean in San Francisco.) and I wanted to be with Bennett the first time he saw the ocean. Also, I had concerns about their dad keeping a close eye on them. So off we all went to spend a week in a suite with some friends. I didn’t have to spend much time with my ex, so it worked out pretty well. 🙂

So, we’re all so excited to get away from the rain for a week. This is what we see from Jacksonville to Daytona. 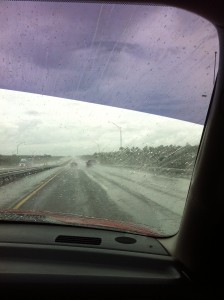 This isn’t his first view of the ocean yet, but he saw a boat in the bay as we crossed the bridge and he was so excited. 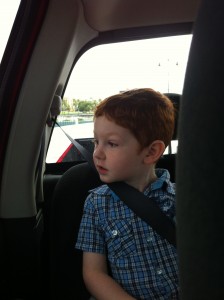 It stopped raining right before we got to the hotel and we had a gorgeous view from our windows.

My beach buddies ready to hit the sand. (They’re not quite ready to trust the ocean yet.) 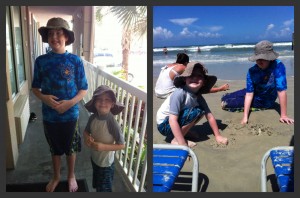 Bennett had so much fun playing in the sand that he wasn’t really concerned about the water. I told him that seashells eventually became sand. So he would find a small shell, pack into a handful of sand, and declare that he had turned a shell into sand.

Later, while the boys were trying to build things with sand, their dad told B to use a combination of wet sand and dry sand. So the boy spent a long time going back and forth, scooping up dry sand, carrying it to the water, washing it out of the shovel, scooping up water, and carrying it back to dump it on dry sand. Hey, he was happy, and it kept him occupied for at least an hour. Check out the look of concentration on his little face. 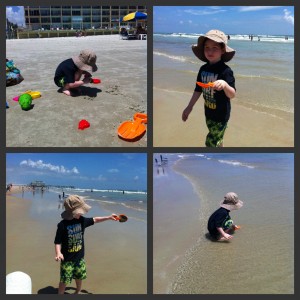 We did get up early one morning to gather shells. 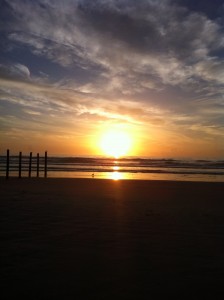 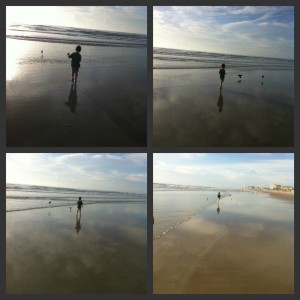 They did get in the water. A bit. Bennett went from not going near it, to me having to tell him not to go in the water by himself in a span of about two hours. They wouldn’t go past their knees, though.

Of course, they weren’t afraid to get in the pool. There are no jellyfish or sharks in the pool. 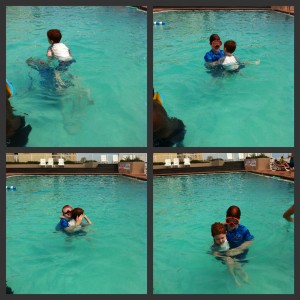 And just because I never post pictures myself on here, here’s one of Bennett and me at the end of the pier. (Jeffrey didn’t want to walk that far.) We had to brave about 50 fishing poles to get this picture. (It was very windy. His head isn’t really pointy.) 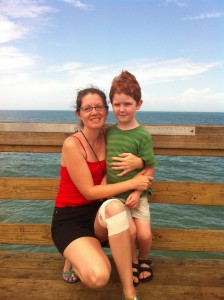 During that same walk, I took Bennett to the arcade. He was so excited to get some tickets. He didn’t even care about any prizes. 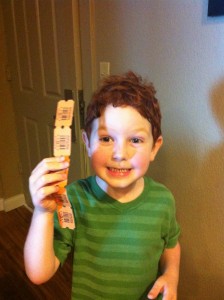 It actually turned out to be a fun vacation. We hit a bit of snag a couple days in, but that’s for Part 2. Don’t miss my next post to find out what happened back in Georgia while we were enjoying the beach.

*All collages were made using fotoflexer.com.