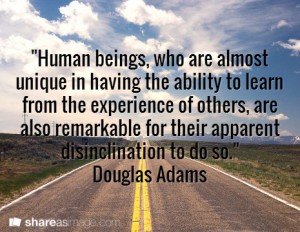 I don’t think it’s just stubbornness (although I’m sure that plays a role). I think that as humans, we just need to experience things ourselves to really understand – to learn the lesson. Think about it: did you learn better in school when a teacher just told you something, or did you learn better by actually doing, whether it was writing, math, science, or a game during P.E? Why would we expect the learning experience to change in real life? 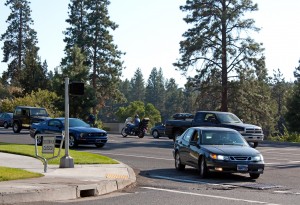 When we’re all moving, traffic flows, and we can all get where we’re going.

The song says life is a highway. We routinely say that life is a journey. Either way, it means we’re all moving along, some faster than others, but everyone going at a speed that’s comfortable for them at that moment. Maybe they’re going slow because they’re low on fuel and afraid they’ll run out. Maybe they’re speeding because they’re really excited about where they’re headed. We don’t know unless we’re in the car with them, and on this particular highway, there’s no carpooling. We can sometimes form a caravan, and drive to our destination together, but we’re all still going to leave in separate cars.

Everyone is at a different place in life, because we have all had different experiences. Even siblings will not have had the exact same experiences growing up, because each of us is an individual with a distinct personality, and even if we are side-by-side at the same event, we will have different reactions and emotions. Even two eye-witnesses to a crime or accident often don’t see the same things.

If you’re a health nut (like me), you know that if everyone would just listen to you, they would all be healthy and happy, because you have all the answers to what ails them.

If you’re an environmentalist, you know that if everyone would just listen to you, we could save the world tomorrow.

If you’re an advocate of a particular style of parenting, you know that if everyone would just listen to you, we could stop all the school shootings and keep all the kids out of jail.

If you’re a Christian, you know that if everyone would just listen to you, we could accomplish all of the above.

If we were all going the same place at the same time, nothing would be accomplished.

As humans, we are all imperfect. We are never completely right. Never. Guess what that means. Something you think right now, some belief you have, some conviction you hold, is wrong.

The problem is, you most likely don’t know it’s wrong. Yet. But as you experience life, you will change, or at least you should. That doesn’t mean throwing out everything you believe in. Just understanding that you will grow and gain wisdom (often the hard way) as you live life.

Just as you are in the place your experience has landed you, so is everyone around you. How do you react when someone tells you you are wrong? You get defensive and angry and are ready to defend your thought, opinion, or conviction to the very end, and you’re not going to listen to anything the other party has to say.

So why do we expect others to react differently when we tell them their thoughts, opinions, or convictions are wrong? I’m not talking about an intelligent discussion of ideas. If no one ever talked about things with those with differing thoughts, the world would be at a standstill. But a rational, intelligent discussion is different than an argument complete with shouting, name-calling, or (if you’re online) ALL CAPS! But that’s probably better than a lecture. Who wants to listen to a lecture? About anything?

So, here’s the thing: we have no idea what is going on in someone else’s car if we’re not in it. Sure, we can see in the windows, but we’re also looking out our own window, which may or may not be clean. Also, unless your cars are touching, you’re not really close enough to see well. (Even if your cars are close enough to touch, you may think you can see everything, but there’s still a few feet between those driver’s seats.)

Let me jump back to Christians for a minute, and if this applies to your pet subject, then feel free to run (er, drive) with it.

I’m not arguing theology here. I’m not arguing about what’s right and what’s wrong or what the Bible says. I’m arguing that we’re all human, and you don’t know what God is doing with the people in the other cars. That sin you can see through the windows is no worse than that sin you’re hiding. So, if someone has a flat tire or is out of fuel, and needs help, by all means, pull over and help them. But you are not a tow truck. You can’t drag them along to the place you want them to go.

Let’s say God has convicted you that a certain kind of music is not for your ears. That’s between you and God. If he doesn’t want others listening to the music they’re listening to, He’ll tell them. Do you think you’re the only one He speaks to? Or maybe they’re not ready to receive that message yet. Maybe there is another lesson they need to learn first. Or maybe their particular weaknesses aren’t affected by what music they listen to, and He’s convicting them about something completely different. Trust God to know what he’s doing.

Now apply that to movies, books, clothing, language, yoga, or whatever it is you think you need to save the world from. 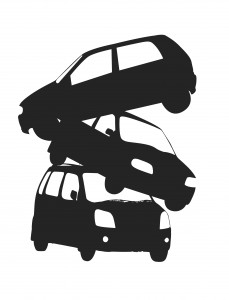 Two or more objects can not occupy the same space at the same time.

Your spot on the map at any particular time is yours alone. You can’t share it with anyone. Even if you hold the same religious beliefs as someone else, you’ll have different opinions about exercise or health or parenting or the best paint color for cars or a preferred floor plan for your home. Seriously. It’s going to be something. You will never find anyone who agrees with every belief you have. And that’s a very good thing.