B: Antelope is one of my favorite fruits.

B, after watching Pooh’s Heffalump Movie: So, I guess there’s a Pooh’s Woozel Movie.

B: Who’s your favorite person in Star Wars?
Me: I don’t know. I don’t really like most of them. (After some thought, I’d probably say Yoda.)
B: Hence I play Lego Star Wars and hence I play Anakin–
Me: You keep using that word. I do not think it means what you think it means.

B: Coughing is a good sign of something bad.

B: There’s two bags of pretzels in here. One is unopened and the other one isn’t opened.
Me: Uh…Okay?

B: Mama, can you come help us find the Lego piece? You have sharp eyes. What does “sharp eyes” mean?
Me: Probably shouldn’t be using words you don’t know the meaning of…

Blake saw blue lights flashing up ahead.
B: What’s that, Mama?
Me: That’s the police.
B: What are they doing?
J: Policing.
Me: They have someone pulled over.
B: Why? Did they make a u-turn?
(Apparently that’s the worst thing someone could do.)

B: Did Jack’s voice used to be like mine?
Me: Yes.
B: so why does his voice sound different now?
Me: Because as you get older, you’re voice changes
B: So your voice used to be cute?
Wow. Didn’t see that coming.

J: Wait a minute! If cockroaches can survive a nuclear explosion, what the heck is in those spray things?

B: “I was kind of good at the jump bag game.”
We always called them “sack races”, but whatever works… 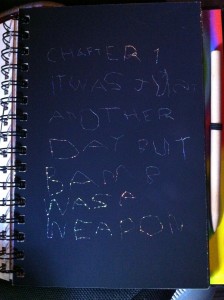 Blake has started writing his first story, which is apparently a chapter book.
“Chapter 1
It was just another day but Bamb [Bambi] was a weapon.”
Ambitious *and* weird. He’ll make a great writer.

Carol Topp is a Certified Public Accountant who wanted something to help her teens learn about planning and managing a business. When she couldn’t find anything she was happy with, she wrote the book herself. As someone who has read way too many small business/marketing/bookkeeping books and/or websites, I was very impressed with the way the information was presented. Most of it was not new to me, but it was definitely written in a way that was easy to understand, and I even picked up a few new ideas.

First, I’ll go through my impressions of the books as I read them. Then I’ll have an interview with Jack about his thoughts. The suggested pace for the books is one chapter a week. My son read one chapter a day, although that was spread out over five weeks, rather than the three it would have been had he read one each day. I think it would depend on what actions your child is taking as they complete each chapter. We’re still in the early planning stages since he didn’t see anything that jumped out at him as a business he wanted to start right away. (Although there were a couple of things he’s thinking about.) END_OF_DOCUMENT_TOKEN_TO_BE_REPLACED

I admit it. I read the story about Clare being kicked out of her prom (the original post does contain profanity) — whether it was truly because the dads had complained that she was dressed too provocatively or because some of the women just thought so — and I was outraged.

I’m all about encouraging women and equality for women and ending the “blame the victim” culture in which we are so entrenched.

“You were asking for it.”

“It must have been punishment for your sin.” (That’s a favorite that I just learned about. Apparently church leaders are using that one.) END_OF_DOCUMENT_TOKEN_TO_BE_REPLACED

The unforgettable story of a young Palestinian boy whose mathematical gifts allow him to escape the difficulties of life as an Arab Israeli, The Almond Tree is a beautifully crafted debut novel written by a Jewish American woman from the perspective of a Palestinian Muslim male. It is about the power of love, the price of hatred, and the possibility of redemption.

Even as a young boy Ahmed Hamid struggles with knowing that he can do nothing to save his friends and family. Coming of age under Israeli martial law, his entire village operates in fear of losing their homes, jobs, and belongings. But more importantly, they fear losing each other.

With his father imprisoned, his family’s home and possessions confiscated, and his beloved brother Abbas succumbing to hatred in the face of conflict, Ahmed must find a way to care for his family and find a better future for himself. Gifted with a mind that can solve mathematical equations, he uses his intellect to take an inspiring journey that will lead him from his war-torn homeland to a life in America he could never have imagined for himself.

A sweeping story of family, love, and friendship told against the devastating backdrop of half a century of conflict, The Almond Tree is a powerful novel that allows us to walk in one extraordinary Palestinian’s shoes and see the world through his eyes. END_OF_DOCUMENT_TOKEN_TO_BE_REPLACED

Today’s review is for the Rhythm of Handwriting Manuscript Complete Set from Logic of English. I don’t usually request review products in subjects in which the kids haven’t expressed an interest, but the boys’ other parent was concerned that they weren’t doing enough “school-like” things, so I thought handwriting for the five-year-old would be a good place to start. We won’t tell Dad that the boy actually (mostly) enjoyed the practice.

There are a variety of ways to use this program, and we almost used one of the suggested ways. 😉 (You know I have to do my own thing.) Blake’s fine motor skills still need some work (so do his gross motor skills, but that’s not relevant right now), so after trying the workbook for a couple of days, we decided to just stick with the whiteboard for now. It was much easier for him, not just because the lines are wider, but because the marker slides across the board easier than a pencil on paper. END_OF_DOCUMENT_TOKEN_TO_BE_REPLACED

Marriage Isn’t For You: It’s for the One You Love

What is the best wedding advice you ever received? For author Seth Adam Smith, it was the advice from his father who said, Marriage is not for you. It is about the person you marry. These few words completely changed the way Seth looked at his relationship with his wife-to-be. Because at that moment he realized that an expression of love is not about the person expressing it. Rather, it is about the person they choose to be with. It is about making the person you marry feel loved. Seth’s blog post on the subject was viewed by more than twenty-seven million people, and he has been featured on several national TV programs including The Today Show. Now released as a hardcover book, these sage words make the perfect gift for newly married couples, those who have been around the block a few times, or anyone who wants to learn how to make their relationships stronger.

Praise for Marriage Isn’t for You END_OF_DOCUMENT_TOKEN_TO_BE_REPLACED

Thought I’d forgotten about this, didn’t you? Well, I kind of did. LOL Here’s the kids’ playroom in the midst of me cleaning out the five-year-old’s closet. Which has gone for a week or so… 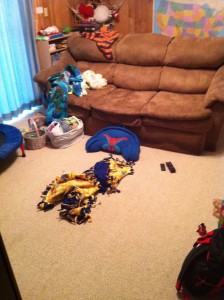