So, I apparently spend way too much time reading. I joined Goodreads in 2011, and in 2011 and 2012, I logged 300+ books each year. I didn’t do a very good job of logging in 2013, and my Kindle is full of books that I’ve read and not checked off yet. I finally determined that I just wasn’t going to get to it and I’ll just have to mark those book read without a confirmed date as I run across them.

I know which ones are the 2014 books because I got smart and started a 2014 Read folder on my Kindle. (Which means that any other read books on my Kindle are most likely 2013 books, but I’m not going to worry about it.)

Some of those books were Outlander-size, such as, well, the latest Outlander book, along with a few anthologies. Some were short stories or novellas. Which is why I like the pages read feature. I don’t know that it’s 100% accurate because I’ve seen a few books that don’t have page counts on Goodreads, but it’s close enough for me.

So that’s an average of 228 pages per book or 209 pages a day. The day thing isn’t really accurate, though, because there were days I didn’t read at all. Hard to believe, I know.

And just for fun, I thought I’d share my most-read authors. (Well, considering that my 2013 books haven’t been recorded.) I think it’s pretty obvious which genre I prefer. I was going to just list my top 10, then I decided to simply take a screen shot of however many would fit. (This is all-time, not just 2014 or even since 2011.) 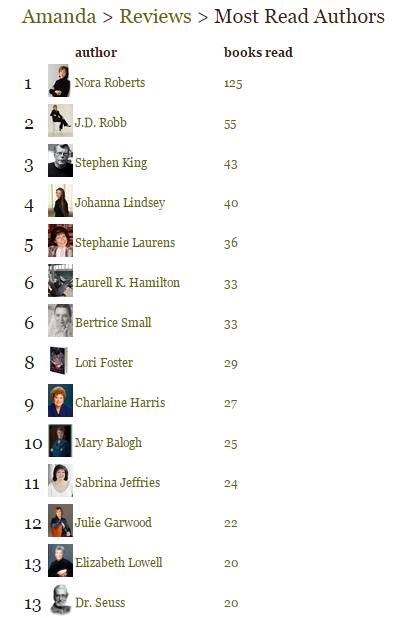 Did you meet your reading goal this year? Who are some of your favorite authors?