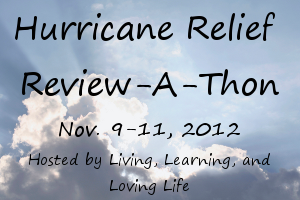 I’ve been playing with the idea of hosting a Review-A-Thon for a while. I certainly have enough reviews I need to write. The books are read and notes made; I just need to put it all together.

Then Sandy hit and I wanted to do something but I had no idea what. I just sat around feeling hopeless for a day or so until an author friend living in New York posted that her entire neighborhood was devastated. The photos were bad enough, but actually knowing someone who had lost her home gave me the kick I needed. END_OF_DOCUMENT_TOKEN_TO_BE_REPLACED

I grew up in central Arkansas, where bad weather and tornadoes were just part of the package. There were a lot of power outages, occasional damage and the rare fatality. Then my dad’s job sent him to east Tennessee where they have their share of storms, but tornadoes are rare. I looked up the statistics, because I’m just a geek like that. Faulkner County, AR has a tornado activity “significantly above Arkansas state average.” And that’s pretty high. The activity is also 8.6 times the overall U.S. average.

Cocke County, TN, on the other hand has a tornadic activity 1.3 times below the overall U.S. average. When my dad’s job transferred him back to AR after three years, his boss was transferred too. She had lived in Cocke County all her life and the tornadoes in AR really freaked her out, because she wasn’t accustomed to them.

I went to elementary school in Vilonia, AR. Unless you’ve been living under a rock (which may be the safest place right now if you live in the South), you know Vilonia was hit by a tornado Monday night. It’s spring, so of course, in AR, that means tornadoes. So when my facebook feed started filling up with statuses about the coming storm and tornado warning, I was concerned for my friends and family in Conway and the surrounding areas, but I had no idea how bad it was going to get. I’m in Georgia, and my computer and TV were off, so all my information was coming from facebook. My first clue that things were ugly was when a former classmate in Vilonia posted that her family was okay, but her bathroom was gone. It went downhill from there. Power outages, damaged homes, trees down, roads blocked. I thought about not posting this because any fear I felt for my friends (by then I knew the tornado had missed the area where my family lives) can’t possibly come close to what they felt sitting in closets and bathrooms with their families. But all I could do was pray and watch it all unfold on my phone screen.

Vilonia is still cleaning up and will be for some time. There were four fatalities, but I haven’t seen the names anywhere, so if it’s someone I know, I don’t know about it. As far as I know, everyone I know made it through, although several have damaged homes.

Tuesday evening, when facebook again lit up with tornado warnings, I called my mom in Conway and stayed on the phone with her until the storm passed so I could make sure she was okay. I had my laptop on that night and I was switching back and forth from weather maps to facebook so I could follow what was happening “on the ground”. There were some tornadoes in AR that night, but no damage near Conway or Vilonia.

Wednesday night, I went to bed about nine, in the midst of a tornado watch and severe thunderstorm warnings. I woke up a few minutes after eleven with my text alerts going off, the tornado sirens going off and the sick baby whimpering and crying. Because everyone needs a sick child in the middle of a storm. (He has a fever and a cold. He’ll be okay.) I’m not sure which one woke me up or if it was a combination of things.

I used my phone to check the local radar, then flipped over to facebook to see what was going on around us. I couldn’t believe it when my high school friends in TN started talking about a tornado there. Really? I know there were 300+ tornadoes this week, but what are the odds that the two towns where I spent most of my school years (I did spend a few months in Yuma, AZ and one school year in Conway, AR) would both get hit hard during the same week? Especially when one of those towns rarely gets tornadoes. Again, everyone is safe. Lots of trees and power lines down. My best friend isn’t online, so I had to check in with her this morning the old-fashioned way. I called and aside from some hail damage to the cars, she and her family are okay.

Our high school didn’t fare so well. The gym roof’s gone and the air conditioning units were apparently in a tree somewhere.

I was awake until almost 1AM, until the storm passed us here and it looked like the worst had passed Newport. Getting up this morning and reading about and seeing the pictures of the devastation all over the south, especially in Alabama, was heart-breaking. It’s really hard to comprehend that level of destruction.

If you’re wondering how you can help tornado victims all over the South, the Red Cross is accepting donations and blood. You can donate online or text REDCROSS to 90999 to donate $10. The $10 will be added to your phone bill.
The Salvation Army is also providing assistance. Donate online or call 1-800-SAL-ARMY and designate April 2011 Tornado Outbreak. Donors may also text “GIVE” to 80888.
A facebook page has been set up as a “Lost and Found” (well, mostly “Found”, really) for documents and photos that have blown away and been picked up elsewhere.
If you live in one of the affected areas and are in a position to donate clothing, diapers, or food, you should be able to find local churches or businesses that are accepting donations.