Buying from a small business is the best way to help our economy. When you buy from a small business, your money is going to a family rather than a corporation. Even with direct sales, while some of the profit does go to the company, part of it goes to the individual representative. When you support crafters and artists, you’re not only getting an original gift, but you’re encouraging someone to continue to explore and develop their talents.

I am providing these links as a service to my readers, both as customers and business owners. This listing is not an endorsement, nor am I responsible for content on outside websites. I am not receiving any compensation for this listing or for any sales made on these sites. (With the exception of The Pampered Chef.) END_OF_DOCUMENT_TOKEN_TO_BE_REPLACED

For years, we’ve heard that buying American-made cars is better for the U.S. economy, but have you ever thought about the small things you buy and where they’re made? Most of us don’t. We complain about cheap toys made in Taiwan or China right before we go out and buy another one, but that’s about as much thought as most of us put into it.

A few weeks ago, I was waiting for something to come on on ABC. (I can’t imagine what, because I don’t watch much TV. Apparently, I thought it was important enough to tune in early. Not important enough to remember, though.) While waiting, I saw Diane Sawyer doing a story on American-made products. ABC had recruited a family and the object was to find items in the house that were made in the U.S.A. To their shock, they couldn’t find anything. I think after removing everything from the house that was manufactured in a foreign country, there were only two items left in the entire house. That was pretty surprising. And this family thought they had been buying American. They just never really looked.

It took me a little while to get around to it, but I decided to check our house. I couldn’t find anything on the big appliances, but some online research revealed that my Maytag washer, Kenmore dryer (manufactured by Whirlpool), Whirlpool dishwasher and stove were all made in the U.S. Honestly, I was surprised. On through the rest of the house. My KitchenAid Mixer is also made in America. Yay! (It only says assembled in USA, but I checked online.) 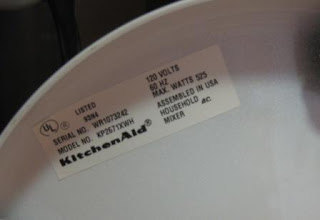 We didn’t have as much luck in the rest of the house, though. We got tired of looking. China was the most popular country in our search. We did find something in the playroom that was made in the U.S. The big U.S. and world maps we have on the walls were printed in the U.S.  Nothing else, though. I did find out that you can’t buy an American-made TV. There are no televisions produced anywhere in the U.S. (Go to the ABC website and find the “Click on an item to see where it is made.” Click the arrow, then select the TV icon.)

Why does it matter? According to ABC World News, “In 1960, foreign goods made up just 8 percent of Americans’ purchases. Today, nearly 60 percent of everything we buy is made overseas.” Every dollar we spend on overseas products is one less dollar in our country. Sounds obvious, doesn’t it? We just don’t think about it. We’re all just waiting for the government to enact or change or rescind trade agreements. But we have the power. We vote with our money. According to ABC, economists say that if we spent just 1% (that’s just 18 cents a day) more on American-made products, it would create 200,000 jobs immediately. Maybe instead of relying on the government to solve everything, we could step up and do something ourselves.

Resources:
ABC “Made In America” site
Where to find American-made products – ABC has compiled a great list of sites, including the StillMadeInUSA.com site I used to find out about my appliances.