On Wednesday, we went to the store and bought snacks and drinks for the trip. The boys wanted Ruffles Cheese and Sour Cream chips (or something like that). The first bag Jack found was a little 6 or 7 oz bag that had been stuck on the shelf in the wrong place so it was the only one he could find. We finally found the bigger bags. The little bag was “Oven-Baked.” The big bag was not. We got the big bag.
Thursday afternoon in the car.
B, turning the bag around and around: Where does it say “reheated?”
J: It was “oven-baked,” and that was the other bag.
I’m so glad Jack can read his brother’s mind, because I had no clue what Blake was talking about.

I’m totally stealing this one because I was there and I can. This is a conversation between my cousin’s wife and their four-year-old son.
Mom says something about her sister.
4yo: Who’s your sister?
Mom: well, who’s your aunt, besides Aunt Laurie?
4yo, After a couple of false starts: Aunt Ann?
Mom: Yes.
4yo: Who’s Aunt Hannah?
Mom: There is no Aunt Hannah.
4yo: Then how’s she your sister?

Darius Rucker: My baby plays the guitar.
Blake: That’s pretty impressive.
Me: Not *that* kind of baby. END_OF_DOCUMENT_TOKEN_TO_BE_REPLACED

B: Jack, I need to tell you: When you told me to examine my zipper, my zipper was already examed.

B: I love you, Mama. And I love Daddy and Jack and my computer.

Overheard:
B: Jack! Lumberjacks are not a thing!
J: Yes they are. They’re those guys who cut down trees and eat pancakes.

B: It’s cool that you can hear what you say. I just did it again! I heard what I said! That’s such a cool feature!
No, he’s not talking about a game.

Blake and I helped put out the eggs at a huge local egg hunt. He had fun, but was concerned about “hunting” later because “now I know where all the eggs are hidden.” Check out the clever hiding spots: 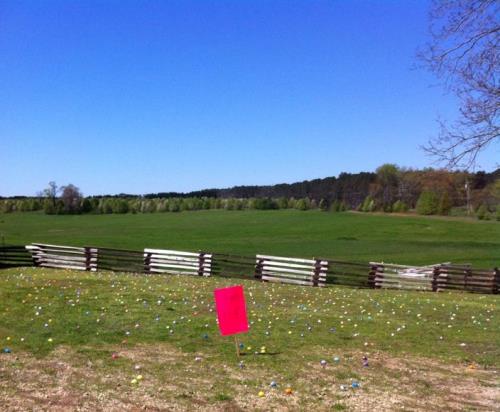 I grabbed the first Easter basket I found yesterday morning, and somehow managed to find what is probably the only one in the house with plastic grass (or any grass) in it. In the car, Blake asked, “Why is this green stuff in here?”
“It’s supposed to be grass. I’m not quite sure of the point. Mostly decoration these days.”
“I like it. It adds detail.”

April 1:
I was on the phone around noon when Blake realized the date. He ran over, pinched me, and yelled, “April Fools!”
Wrong annoying holiday, dude.

Apparently Blake learned it was April Fools Day when Jack opened his bedroom door, threw his shirt in Blake’s face, and yelled, “April Fools Day!”
There may be some confusion about what a prank actually entails.

B: There’s my cough again. I have no idea what’s triggering it.
Dude. You’re six.

We had BBQ chicken for supper. Someone said something about sauce on their hands or the mess or something.
B: That’s because Jack and Daddy use their hands. Like pigs.
J: Pigs don’t have hands.
B: Then how do they catch their prey?

J: I poured too much salsa.
B: How much did you pour?
J: Enough and a half.

Blake asked for a new Minecraft mod. Even after trying different versions, I couldn’t get it to work.
B, with his little lip quivering: But I really wanted that mod.
Me: We’ll try again in a couple of months. Sometimes they’ll update something and it’ll work.
B: Okay. I guess we have to wait until January.
Me: I think we can try again before then.

B: How do you spell “frew?”
Me: Uh…
B: Like “If you go frew this door…”
Is is wrong to not want him to grow out of his speech issues when it’s this cute?

B: March has 31 days, right?
Me: Yes.
B: But it has more in Leap Year?
Me: No. February is the only month that gets an extra day.
B: Why does February only have 28 days? Is it so we get to December faster?

First thing out of Blake’s mouth when he woke up this morning: I learned something. A light flickering in a room in a horror movie is NEVER good. Unless it’s just someone standing in the room turning a flashlight on and off. But that doesn’t really make sense, so no one would probably do that. Unless they turned it on to see if it worked, and said, “Hey, cool! It works!” And kept turning it off and on to see if still works.

B: Is a beacon a real thing?
Me: Yes. It’s like a signal.
B: So if you’re in the city of the undead and you’re lost, you can send up a beacon and get help?
Me: Uh, that’s not the typical usage, but, yeah.

We’re downstairs watching The Hobbit. Blake was upstairs and came down to tell me he was hungry. His dad is upstairs. In his chair. Right beside the kitchen door.
B: I’m hungry.
J: Get Daddy.
Me, at the same time: Where’s your daddy?
B: Daddy’s asleep. You’re not supposed to wake someone up in case it’s an emergency.
Me: Unless it’s an emergency?
B: Yeah. That.

Bilbo was trading riddles with Gollum.
Blake: It’s not really fair because Gollum has two people. Gollum and Beagle.
I didn’t catch what he said at first, but Jack laughed.
Blake: No…Bagel.
Keep working on it, son.

J: Blake, don’t turn on the tv. It takes you too long to eat and we have to leave.
B: But I need something to advertise me.
Me, after thinking for a few seconds: Entertain you?
B: Yes.

J: I wish my left leg were as flexible as my right leg. It would be more convenienter.

B: Daddy’s making a green drink and he wants to know if you want one.
Me, assuming he meant some kind of smoothie: I don’t know. Depends on what he’s putting in it.
B: Some ice and some other thing that I don’t know.
Me: That was helpful.
Turns out Daddy was making margaritas.

I was taking Legos apart.
B: Here. Let the child-man show you how to do that.
(Before the feminists freak out, it didn’t come across that way at all. I’d have stopped that in its tracks.)

B kept dropping the pegs into the bottom of the Battleship case.
B: This is hard.
Me: I don’t have any trouble holding in to them.
B: you’re older than me so you’re more durable.

Jack and I are watching Star Trek. Blake came down the stairs in a Darth Vader mask.
Me: Go away, Darth. We’re watching a different space movie.
Darth: Dagnabit.

Blake and I were playing Life. He landed on a block that awarded him $95,000.
B: I can buy anything I want until it’s all gone!
Me: That pretty much applies to any amount of money.

B: I uninstalled some of my other games so I have room for this one now. Last time I tried to install it, it said I had insignificant space to install it.

The boys are watching Teen Titans GO!
Blake laughs.
J: Blake, that’s not really funny.
B: Then why are you smiling?
J: Because you’re smiling.
(I love it when they do stuff that reminds me why I keep them around. 😉 )

Jack and I were watching Star Trek: The Motion Picture. (I don’t recommend it, by the way.) It was the first time either of us had seen it. The first couple of minutes are just music with a black screen. No stars, no scene, no credits, nothing. We were talking about how weird that was (little did we know that it was a sign of boringness to come) when Jack said, “It’s a motionless picture.” END_OF_DOCUMENT_TOKEN_TO_BE_REPLACED

B: You know how I’ve been grumpy the past few days…
Me: Have you?
B: Yes, when you weren’t looking.

Jack came home from a weekend camping trip with a lovely virus. At this point, he’s had a fever for two days. Blake isn’t feeling well, either, although he’s in better shape than Jack.
B: I don’t think I’m gonna make it.
Me: you don’t? Oh no! Why don’t you lie down here and let me measure you for a coffin?
He giggled and I walked off make the tea he had requested.
B: Wait! Aren’t you going to do the cough thing?
Me: Coffin. Do you know what a coffin is?
B: It’s what vampires are in sometimes.
Me: It’s what we bury dead people in.
B: Oh. I didn’t know.
Me: I kind of figured that out. END_OF_DOCUMENT_TOKEN_TO_BE_REPLACED

B: You know why I haven’t been wearing my tennis shoes? Please don’t be mad at me. It’s because they have quicksand all over them.
Me: …

Blake kept asking questions like, “How old will I be when you’re twenty?” and “Will you move out as soon as soon as you’re twenty?” Jack finally told him, “Don’t worry about that stuff for years. Just enjoy being able to be weird in public without being arrested.”

Me, still trying to convince the boy we’re not going to drown in our yard: See, the water is flowing down the street, down the hill.
B: Yep. It’s just minding it’s own business.

B: Daddy and me are going to the Waffle House.
Me: Okay. Have fun. I’m going to have some oatmeal.
B: Don’t start a fire.
Me: I’ll do my best.
B: You’re a high level of cook.
Apparently not, if my 6yo thinks I’m going to start a fire while cooking oatmeal. END_OF_DOCUMENT_TOKEN_TO_BE_REPLACED