I’m not good at keeping track of my stats. Whether it be blog visitors, Twitter followers, or Facebook fans, I just don’t pay much attention. There was a time I did, of course. We all do. I just stopped worrying about it somewhere along the line. I only know my Facebook page reach because Facebook has stuck it on my newsfeed page.

So it was completely accidental that I noticed I had more than 18,500 Twitter followers a few days before the end of the year. Being a tad bit OCD, and enjoying those round numbers (and a little bit just to see if I could), I decided to see if I could make it to 20,000 followers by the end of the year. (I made it with few hours to spare. By noon on New Year’s Eve, I had 20,000 followers.)

Of course I was excited, and of course I shared on Facebook and Twitter, which led to several people asking how I got that many followers. When I looked at TwitterCounter and realized that I had gained 8,000 of those followers in the last six months, I was even more excited, and knew I had to share my “secrets.” (They’re not really secrets, but it makes me feel important so just roll with it.) 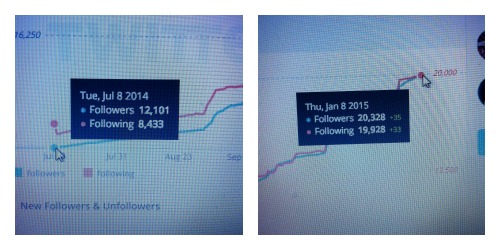 I apologize for the poor quality of the photos. To get that box to pop up, I had to mouse over the date, which makes it impossible to use Snipping Tool to get a screen shot. iPhone to the rescue.

These are in no particular order. I have no idea how many followers came from which method. I’m very sure the majority came from me following others first, however I found them. When you follow someone, there’s a pretty good chance they’ll follow you back, and most people will unfollow those who do not follow back after a period of time. 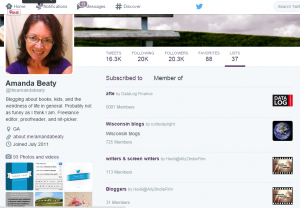 The best way to get followers is to follow others and interact with others. You’ll follow some people who won’t follow you back, and you can decide how to handle that. There is no rule that says you must follow everyone who follows you. If you want to see who isn’t following you back, you can use a program like ManageFlitter. (I use the free option.) I usually follow about 100 people a day, and several times a week, I go into ManageFlitter and unfollow the “oldest” 100 people who aren’t following back. I have about 4,000 people who aren’t following back, so I figure I’m giving them at least a month.

You can also do keyword searches for your field or your interests, but I always end up with more junk results than good ones. I probably need to work on using better search parameters, but for now, I’ll skip the searches.

It’s very easy to build a good following on Twitter in just a few minutes a day, without spending any money, whether it’s on a legitimate system like ManageFlitter or buying fake followers (which doesn’t help in the long run and if Twitter catches you, they’ll suspend your account). These are the methods I used.

What methods have you used to get Twitter followers without spending any money?