Jack and I have been watching Star Trek, starting with the original series. We were watching an episode in which Kirk and Bones are talking about the History Officer, and mention that one day, she’ll get married and leave the service. Jack and I ended up having a discussion about how in the sixties, the paradigm was just beginning to shift from women working until they married, then staying home. Even in what was supposed to be more than three hundred years later, you can see that the series is a product of the era in which it was made.

You might be a homeschooler if you use Star Trek to start women’s right discussions. 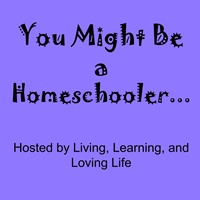