Mira wants to die. She’s attempted suicide twice already and failed. Every time she comes in contact with another person, skin to skin, that person’s psyche uploads into hers. While her psychologist considers this a gift, for Mira it’s a curse from which she cannot escape.

To make matters worse, Mira’s father is being investigated for the deaths of several volunteer test subjects of the miracle drug Gaudium. Shortly after Mira’s mother starts asking questions, she ends up in a coma. Although her father claims it was an accident, thanks to her “condition” Mira knows the truth, but proving it just might get her killed.

“CONTACT is a page turner that will keep you guessing right along with Mira, right up until the last revelation. And it will make you reconsider the next time you wish you knew someone else’s secrets!” – Margaret Petereson Haddix, author of the Missing and The Shadow Children series

END_OF_DOCUMENT_TOKEN_TO_BE_REPLACED

Blake was right in my face and said, “Why do you have three eyes?”
“I don’t silly. And it’s a good thing or my glasses would be even more expensive.”
“You’d have to get glasses and one of those things mayors wear.”
“Who wears?”
“Mayors. You know those guys who own the city.”
You heard it here first. All mayors own the city and wear monocles.

Of course I had to ask Blake where he got the idea that mayors wear monocles. And of course that conversation went nothing like I anticipated.
Me: So what makes you think Mayors wear monocles?
Rolls his eyes like he does when he’s embarrassed.
Me: No, it’s okay. I’m just curious. Which mayors wear monocles?
B: I think about fifty of them.
Me: Oh yeah?
B: Yeah. And probably about twenty-five don’t.
I nod, because I’m speechless.
B: Yeah. I think about fifty wear them and twenty-five don’t. I don’t know which ones, though. I should look that up.

B: He vanished out of thin air.

Blake was looking for his sandals, and he hasn’t worn them in quite a while. “Oh, yeah! They outgrew me!”

Not to be too graphic, but when did diarrhea become a verb? Blake is recovering (hopefully, please!) from a stomach virus. But he doesn’t “have diarrhea”. He tells me, “I diarrheaed again.”

I used to make shepherd’s pie all the time, and the boys loved it. Then they didn’t. Last time I made it, Blake got all excited when I told him we were having shepherd’s pie until he saw it and realized it was “that stuff” and wasn’t really pie. Tonight, I needed a way to use up some potatoes before they went bad, so I made shepherd’s pie. I figured they’d either eat or I’d have leftovers for lunch.
B: What are we having for supper?
Me: Shepherd’s pie.
B: Does it have the stuff you usually put in it?
Me: Meat, corn, and mashed potatoes. Yep.
B: I love shepherd’s pie!
And they both ate every bit of it without a complaint. I didn’t dare remind them they don’t like it. Excuse me while I bang my head against the wall.

B: The smaller the rock, the harder it is to carry it on your foot.
Apparently, the small rocks fall between your toes.

There were two pancakes left.
B: Hey, Jeffrey, how ’bout we split them both in half?
How ’bout you just each take one? LOL

After finishing his supper of chicken, rice, and mushrooms, Blake turned to me with a big grin on his face and said, “I ate all my fungus!”

At the beginning of what became the longest game of Monopoly Junior ever, Blake asked how much money we were starting with.
“I don’t know. Count it.”
After counting, “Thirty-one dollars! That’s too much money for a kid!”

J: What if Jesus had been born in a different year? If he had been born after 1BC, would it be like negative BC or something?
Blank stare.
He’s still expecting an answer.
Me: I…don’t understand the question.
J: How would they say what year Jesus was born if he’d been born after 1BC?
Me, sputtering: The dates aren’t from the beginning of time up to Jesus’s birth. The dates start at his birth and go backward.
J: Why didn’t someone tell me that? 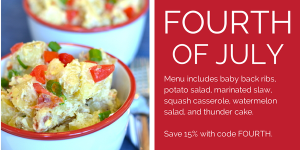 Ready for great food and good times on Independence Day? Get inspired with eMeals’ FREE Fourth of July Menu.

It is FREE with any eMeals subscription purchase, so check out 1 of their 60 meal plans on their website

today to help you get dinner on the table in a snap every night. Now, onto the sneak peek recipe for Bacon Potato Salad from the July 4th menu!

1. Cook potatoes in boiling water to cover with 1 teaspoon salt 20 minutes or until tender; drain and cool 15 minutes.
2. Cook bacon until crisp.
3. Stir together mayonnaise, mustard, pepper and remaining 1 1/2 teaspoons salt in a large bowl.
4. Peel potatoes; cut into 1-inch pieces.
5. Add potatoes and eggs to mayonnaise mixture.
6. Stir in bacon.
7. Sprinkle with tomatoes.
8. Refrigerate until ready to serve.

Earlier this year, we reviewed the Motivated Moms planner ebook. I highly recommend this system, and if you prefer an app, they have one of those, too! You can read my full review here. (That post does not contain any affiliate links, but this one does.)

I just got an email from Susan at Motivated Moms letting me know that the 2014-15 ebooks are now up on the website and the 2014 ebooks are half price, $4.

The 2014-15 ebooks run July 2014 through June 2015 and are popular with homeschoolers or anyone who likes to run on the school year calendar.

This post is a departure from my regular posts. I have decided to use this platform to allow rape and domestic violence survivors to tell their stories. These posts are not censored or edited, but come straight from the survivor. Some survivors need to tell their story in a safe place, and many others need to know that they are not alone, nor are they to blame. It’s important to me to provide that connection. I chose #itsourstory to spread the word for two reasons: no matter how isolated you feel, you are never alone and this is part of our culture, our society, and it belongs to all of us. If you would like to contribute, you can find more information here.

I was ten years old. In the 4th grade. It had been the best year of my life up to that point.

I still don’t like to talk about it. Or write about it. Or think about it. Even though I’ve published a memoir detailing the incident and its aftermath, the fight or flight instinct still kicks in. And the silence.

The rapist was my so-called-brother. I’m glad we don’t share genetics. It was cruel fate that placed me in a family with this monster.

He molested me once before. A prelude, although I didn’t realize it then. I was nine. I didn’t say anything to my parents even though I was scared and upset. Doing sick things was so “everyday” for him that I thought it wasn’t worth it. It would only cause more yelling and crying, and I hated drama. END_OF_DOCUMENT_TOKEN_TO_BE_REPLACED

This post is a departure from my regular posts. I have decided to use this platform to allow rape and domestic violence survivors to tell their stories. These posts are not censored or edited, but come straight from the survivor. Some survivors need to tell their story in a safe place, and many others need to know that they are not alone, nor are they to blame. It’s important to me to provide that connection. I chose #itsourstory to spread the word for two reasons: no matter how isolated you feel, you are never alone and this is part of our culture, our society, and it belongs to all of us. If you would like to contribute, you can find more information here.

I was 14 when it happened. My mom had kicked me out of the house (again). I decided to go to the beach because I had nowhere else to go. I didn’t have enough money for the bus so I thought hitchhiking sounded like a good idea. I had never hitchhiked before, but my cousin did it all the time and nothing bad had happened to her, so it must be okay. Right? END_OF_DOCUMENT_TOKEN_TO_BE_REPLACED