Today’s review is for the Rhythm of Handwriting Manuscript Complete Set from Logic of English. I don’t usually request review products in subjects in which the kids haven’t expressed an interest, but the boys’ other parent was concerned that they weren’t doing enough “school-like” things, so I thought handwriting for the five-year-old would be a good place to start. We won’t tell Dad that the boy actually (mostly) enjoyed the practice.

There are a variety of ways to use this program, and we almost used one of the suggested ways. 😉 (You know I have to do my own thing.) Blake’s fine motor skills still need some work (so do his gross motor skills, but that’s not relevant right now), so after trying the workbook for a couple of days, we decided to just stick with the whiteboard for now. It was much easier for him, not just because the lines are wider, but because the marker slides across the board easier than a pencil on paper.

Both sides of the board are printed, one side with one large set of lines, and the other with five smaller sets of lines. 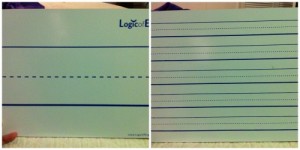 You can start as basic as the strokes, such as straight, slash, circle, swoop, or just move straight to the letters. I decided to start him right into letters and move back if necessary. It hasn’t been so far. The tactile cards are great if you have a child who needs to touch things to make them “click”. Blake had to use sandpaper letters to learn to read, so I didn’t expect any issues with the cards. I didn’t know if he would need them, but I didn’t expect him to complain that they were too rough. They were uncomfortable for me, but I don’t like the feeling of things rubbing my skin, so the other sandpaper letters bothered me, as well.

I still think they’re a fabulous thing to include in the program, especially after our positive experience with textures in reading. Probably just not pushing down as hard on the letters would alleviate most, if not all, discomfort a child might experience if he has sensory issues. My kid wouldn’t try them again, so I don’t know if that would work for him.

He’s doing well without them, though. Some days he only works on one letter, and gets frustrated enough that he asks to quit for the day. Other days, he works on three or four letters. When he reached his first review page, he was amazed that he had already learned all those letters. (I kind of was, too!)

The program starts with lower case letters, and moves on to upper case letters, then numbers. Letters are divided into categories to make them easier to learn and remember: straight letters, drop-swoop letter, down letters, roll letters, slant letter, kick letters, cross letter.

Along with the different sizes of lines on the whiteboard, the book also has different sizes so your child can work with what he’s comfortable with. You could also have him start with the wide set at the bottom of the page and make it a game or a goal to eventually move up to the little set at the top. 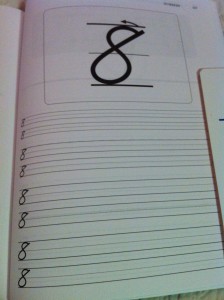 Blake is actually enjoying the program, whether he sees it as a game or a challenge or something, I don’t know, but I’ll roll with it. I asked him, “What was your favorite part?” I wasn’t really sure what he would say, maybe, “Writing on the whiteboard”. I don’t know what I was thinking. His answer: “The ‘h’.”
“Uh, okay. Did you have a part you didn’t really like?”
“Yeah. The ‘k’.”
He really did struggle with lower case k. I wonder how hard he’ll work to come up with synonyms for words that contain ‘k’ until he can totally master it. 😉