Today’s review is for the e-Science Program from Supercharged Science. Do you worry that you don’t know enough to help your kids learn science? Or are you just looking for a fun and interesting way for the whole family to learn? Aurora Lipper is a for-real rocket scientist with a knack for breaking things down and explaining complicated concepts in such a way that anyone can understand them. My brain doesn’t “do” science, and even I am captivated by the site. I could totally sit and watch these videos all day!

The program is set up so that students can work on their own. They can watch videos, read the lessons, and conduct experiments. Many of the experiments have a “how-to” video, so you’re not just looking at a picture trying to figure out how you’re supposed to get your stuff to look like that.

There are twenty units, along with seven “extra” units. You’ll receive access to just a few units at first, simply to keep your child from becoming overwhelmed at his choices. Each month, they’ll open up another 1-2 units (60-80 experiments) for you. You can send an email to Supercharged Science at any time if there is a specific unit you’d like access to, and they’ll give you access without waiting. The units include:

e-Science is appropriate for all ages, and can be purchased in two different ways. You can just get the K-8 units or the high school plan, which also includes K-8, so is really K-12. Lessons and experiments range from basic to complicated. There is something for everyone here, no matter the age or budget. Many of the experiments can be conducted with household materials, and most homeschool families will have all kinds of things already sitting around that “normal” families might not have, like a compass, clay…dust bunnies (I kid you not. That’s an option on the Unit 2 “shopping list”.)

Speaking of which, an easy way to see if you have the items you need for a unit’s experiments is to look at the Shopping List for each unit. The list can be viewed on the site or printed. There are even links to make it easier to purchase those few hard-to-find items. Which is much nicer than just saying, “You need this thing you’ve never heard of and have no clue where to find.”

The *only* thing I don’t like about the site is that the comment system lists the comments with the newest on top. The comments are extremely helpful, and Aurora is great about helping out and answering questions, but it’s confusing to have to scroll all the way down (some pages have a lot of comments, while some only have one or two), and read from the bottom. I do love that the comment system is there in the first place, and I can’t say enough about how wonderful and friendly Aurora is!

We didn’t do all the experiments, of course. Your student can work through the units in order, or jump around to whatever interests them. That’s what my son did, and he found several experiments he was interested in. (I’m still trying to figure out where you’d buy a carnivorous plant. Not so I can get him one, but so I can stay far, far away.) Some days, he just watched the videos and read the lessons. You can adapt the program to the specific needs of your student and family.

Among the many things my twelve-year-old learned from this program is that experiments don’t always turn out as you planned. Or hoped. Or if you do them wrong, they don’t turn out at all.

It was supposed to be a basic thermostat, using an index card and a foil gum or candy bar wrapper. It sounded really cool, and I thought it would be fun for the kids to see how “old school” thermometers worked. However.  I couldn’t find any gum in foil wrappers, and I didn’t want to buy a candy bar. (Why? Because then I’d “have” to eat it, of course. Give it to the kids, you say? Are you kidding?;-)  ) They didn’t have any of the foil-wrapped brands there anyway. I got some gum that had foil on the inside of the main package. (The pieces were wrapped in paper.)

So I cut the wrapper into a strip like the photo shows (this is one of the few experiments that doesn’t have a video), and taped it to the index card. Then we put it in the freezer overnight. 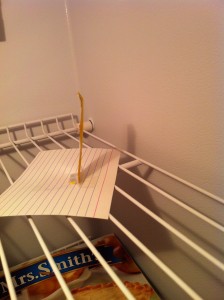 I took before and after pictures, but I could have saved myself some time, because they were the same picture. 🙁

So, off to the website to ask for help we went. I wondered if we were using the wrong kind of foil/paper, since this is slick paper, not the same kind that’s on the inside of gum wrappers. Aurora suggested we try putting it near a heat source to see if it leaned one way, then into the freezer to see if it moved the other way.

We put the card on a space heater (watching closely so we didn’t end up with a combustion experiment), and while I’m not sure it did anything it was supposed to, it did do this:

There was no wind blowing on the wrapper from anywhere. I checked, because it was moving so rapidly. (I have no idea why there is no sound. I didn’t realize it until I was checking the videos on my computer. I’ve had my phone for exactly two years; maybe it’s self-destructing now that I’m no longer under contract. “See! You need a new phone!”)

Anyway…after being way too excited about a moving gum wrapper, we put it back in the freezer, but with no new results. I suspect it really was because we used the wrong kind of wrapper.

Did you know that grapes will move away from a magnet? No joke. It’s because water repels magnetism. The video mentions that if you move the magnet from one grape to the other, you’ll slowly build up an oscillating effect, much like pumping your legs on a swing will gradually take you higher and higher. Well, we were curious about whether the length of the straw would affect the speed of the turns.

We started with the long straw. That worked just as it was supposed to. Maybe more so. I guess we had a stronger magnet than Aurora used because while hers moved slowly, ours was trying to run away.

Then, we tried the short straw. I should have known that wouldn’t end well. There’s a reason “drawing the short straw” is a bad thing. The shot of the magnets on the floor is because the loud “clank” they made when we switched out the magnets. (Which, of course, you can’t hear.) The kids’ reactions to this were pretty funny. The twelve-year-old said, “We broke physics.” Well, we broke *something*. We did manage to not screw up a few experiments. Here are two we didn’t break.

Throwing a ball to demonstrate gravity. Even we couldn’t mess this up.

And the catapult. This was their favorite experiment last year, so we did it again. I couldn’t get the glue to stick so I had to get creative.

Before we started, I asked them which items would go farther: the heavier items or the lighter items. They both said lighter would go farther. We used a big marshmallow, a small marshmallow, a hollow ball, and a small puffy craft ball thingy. (I think it was supposed to be Rudolph’s nose, but we never put him together.) My plan was to see how far everything flew, then go weigh the items. Turns out that everything we could find that fit into the spoon was too small to register on my postal scale. The fluff ball was by far the lightest, and large marshmallow the heaviest. The other two items were in between. In other words, our experiment was fun, but inconclusive.

Basically, this stuff is just too much fun. Oh, and you can learn a lot of stuff, too. 😉

Trial period (1 month) for your choice of plans $1