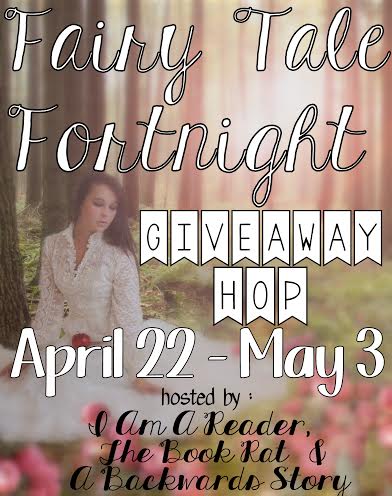 This hop is in conjunction with the 4th annual Fairy Tale Fortnight.
Fairy Tale Giveaway Hop
Hosted by
I Am A Reader, Not A Writer
The Book Rat &
A Backwards Story
April 22nd to May 3rd

I’m giving away an Amazon/Kindle ebook: winner’s choice of one of Jessica Grey’s fairy tale-based novels or short story collections.

Update: Thanks to Jessica’s generosity, you now have the option to receive an .epub version if you prefer, and for those who may not be able to receive a gifted copy of a US Amazon ebook, you can get a .mobi/Kindle copy via email instead! In other words, there is no reason not to enter!

Alex has always been more interested in rocks and science than stories about princesses and magic. Now she’s far too busy with her summer internship at the Gem and Mineral Museum to think about children’s stories. Between avoiding her former best friend and high school baseball star, Luke Reed, and trying to hide her unrequited crush on her mentor at the museum, the real world is occupying all of her time.

…Until she walked into one.

It turns out fairytales aren’t all fun and games. A curse has turned her neat and orderly world upside down, and to break it, she bands together with a fellow intern and a recently awakened princess who’s been asleep for 900 years. Can this trio of unlikely heroines put an end to an ominous enchantment, discover true love, and keep an ancient and evil magic from being unleashed on modern-day Los Angeles?

Two years ago not only had she and her best friend Alex found a real life sleeping beauty in the middle of Los Angeles, they also discovered that they were powerful in their own right. They’ve managed to keep both their fae powers and their friend Lilia’s identity as a medieval princess a secret and live a normal life. Now that normalcy is threatened by the return of their former advisor at the Gem and Mineral Museum, and Becca’s least favorite person, Nicholas Hunt.

And she’s about to find out that more than one fairy tale is true.

Nicholas has been obsessed with proving Lilia’s identity and the existence of magic. While working on an archeology dig he discovered an ancient Fae artifact – a mirror that is imbued with a powerful protection spell that twists his obsession, and his body, until he is more beast than man. In order to protect her friends, Becca is forced to help him and she is surprised to find that in spite of his outward appearance, Nicholas is no longer the beast she remembers. Will she let herself be the beauty that breaks the curse, or will she let her prejudice against him stop her from discovering true love?

After spending her whole life isolated in a tower, Rapunzel’s salvation is finally at hand, but she may have merely traded one form of captivity for another…

Miss Lucinda Beacham is bored. The endless balls and dances she must endure as a debutante hold no enjoyment for her—that is until she finds a frog sitting on the edge of a fountain, a frog who just so happens to know her name…

Being a fairy godmother isn’t all it’s cracked up to be, especially when you’re a junior in high school and your next assignment is your former crush…

Views from the Tower is a collection of short stories that offers new perspectives on some of your favorite fairy tales, including a trio of different takes on Rapunzel. Each story offers a unique foray into the exciting world of fantasy, as well as a golden opportunity to see some well-known legends in a whole new light.

Also includes the first three chapters of Awake: A Fairytale, the debut YA fantasy novel by Jessica Grey

A mermaid willing to trade her life for love…

A young girl whose beauty can drive people mad…

Twelve sisters with a mysterious addiction…

A beast that can only be transformed by love…

Views from the Depths is a collection of four short stories told from perspectives of multiple characters. Each of these stories takes an in-depth and sometimes melancholy look at some of your favorite fairy tales.

Includes adaptations of The Little Mermaid, Snow White and the Seven Dwarfs, The Twelve Dancing Princesses, and Beauty and the Beast.

Views from the Depths is approximately 20,000 words in length.