I’ve had an interesting year. (Ha!) A big part of my attitude shift this year has been toward less stuff and more simplicity. Between having my apartment flooded and having to go through boxes of stuff I didn’t even know I had, and moving yet again, I have determined that we have way too much stuff and I’ve been working on getting rid of some of it. It’s a work in progress. 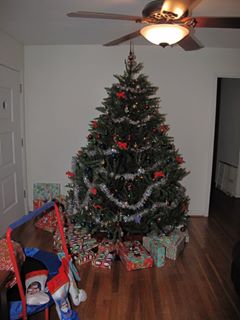 Christmas tree 2010. Some of those gifts are for my grown stepkids, but most of them are for our TWO kids.

That quest for simplicity affects all aspects of life – from not buying things you don’t truly need, to toning down the holiday celebrations so that you have time to actually enjoy your family and friends.

For the past several weeks, I’ve seen post after post on Facebook about how stressed everyone is. Sure, some people got their trees up Thanksgiving weekend, but rather than pictures of decorated trees filling my newsfeed, I’m seeing things like, “We finally got the tree up. Maybe we’ll even get it decorated before Christmas.” Some of the posters are probably being funny; I’ve been known to phrase things a certain way to make mundane things sound more entertaining on Facebook. (Although, with my kids, I don’t have to do that very often.) But when I see post after post like this, together with the other comments people make on group threads or statuses, I don’t think most of them are kidding. 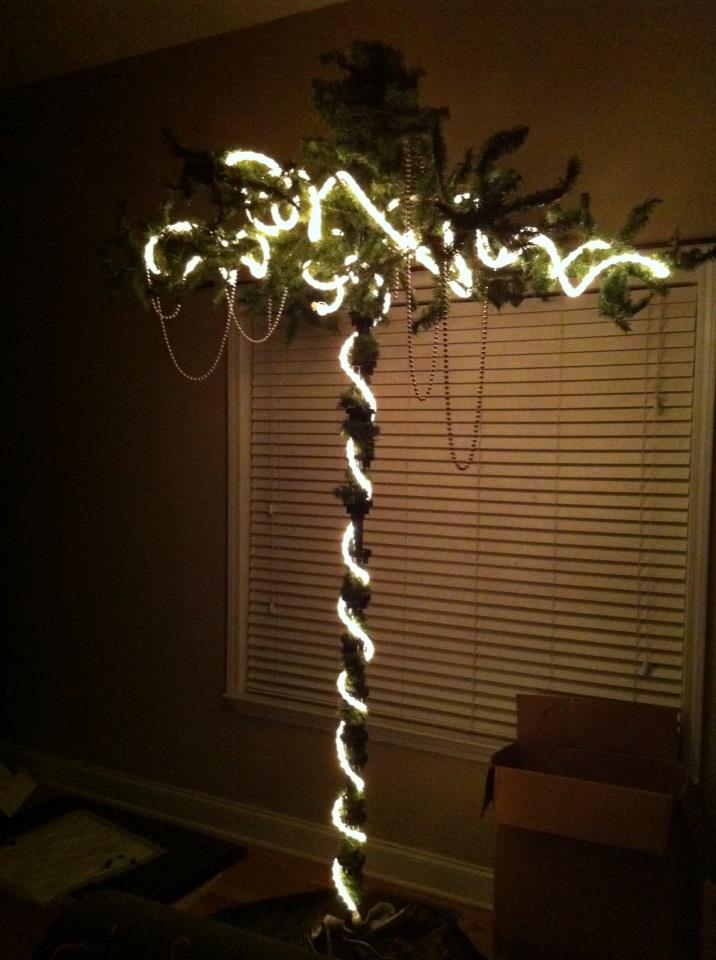 Christmas 2012. The boys and I were living with friends who had 3 teen boys. The boys got frustrated trying to put the tree together, and this is what we ended up with. Cute, fun, and no fuss.

I know this happens every year: between the school/homeschool parties, the plays, the church functions, and visiting twenty different relatives in 24 hours, Christmastime has been stressful for a lot of us for a long time. But it seems so much worse this year. I’m not sure why. It almost seems as if the whole thing has taken on a life of its own and the joy is gone for so many people.

Partly because of money, and partly because my nagging about too much stuff has annoyed the crud out of him, I managed to get my ex to agree to a low-key Christmas for the kids this year. (It also helped that he saw the toys that littered every inch of floor space in three rooms as the boys were sorting which toys they wanted to keep. They got rid of two big tubs full of toys! I really need to get those playroom pictures posted here.) 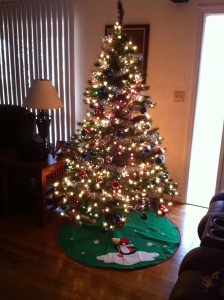 2013. A simpler, smaller Christmas tree. Presents aren’t there yet, but there will only be two per kid, plus their stockings.

This year, we got them each one video game, I got B a water bottle like his big brother’s and some puzzles, and J is getting a couple of books he wanted. They do have stocking stuffers, but the only “big” gift this year isn’t going to cost anything. We’re switching their older (but still in perfectly good condition) playroom TV with the new flat-panel TV from their dad’s bedroom, so they’ll have an HDMI-compatible TV to play video games on. (Apparently some video games won’t let you play 2-player, split-screen without HDMI.) They’ll be thrilled and we’ve only spent about $100 total this year. I know that’s more than some people can spend, but trust me, it’s MUCH less than their dad usually spends at Christmas. And all the gifts will be things the kids will be excited about.

I’m not the only one who is dealing with this. I asked around and some online friends gave me permission to share their comments. Several blogger friends have also already written about this subject.

“I have my outside stuff up, because it’s simple and easy, just some stick in the ground light trees and a nutcracker. Inside, I have my nutcrackers out, and I have the pole to the Christmas tree up, lol! Thinking of just leaving the pole and celebrating festivus this year. 😉I have been in no mood for Christmas, but it will come whether I am in the mood or not, and people will come to my house whether I am in the mood or not, so something must get done, and yes, it will have to get done by me. I shopped a bit yesterday, at least that part is almost done, the few things I need I can send dh to get.

I just put my half tree up. We have a 7 foot artificial tree. This year I made it a 3 1/2 foot tree, we just put up the top half! And I got the lights on it, the ones I tested before I put them on, and now half of them aren’t lit!!!!! This is the stuff I hate!!! My older daughter helped a bit with the tree, but my youngest won’t do anything involving Christmas this year, she is in her “I am against everything stage” and my dh sat on the couch watching tv while I struggled with the tree. Yes, this is why I just want to go to an island for Christmas.” – Donna C.

“We literally threw up a small Christmas tree that was already decorated because we didn’t really want to put up a tree. I literally wanted to bypass Christmas celebrations this year all together. ” -Crystal, Tidbits of Experience 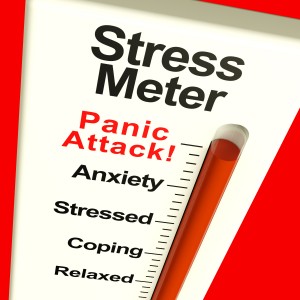 But, there is still hope! (It is the Christmas season after all.)

“For our family, traditions are what keep this season from becoming overwhelming. The girls know we are going to be reading a new Christmas book every night during December and they look forward to it. We make cookies every year for Santa and suckers to give to our friends. We put out nativities and decorate the tree as a family. None of this is stressful to us because it is something the kids love and enjoy and laugh about. We always make an ornament for the tree and sometimes we combine that with other things. For example: the Mayborn Museum here in Waco has a group of model train hobbyists that set up their model trains every year during December and the museum tried to do a Christmas in the Village day during that time (they have a turn of the 1900s/century village). We go to those every year and this year they had activities to make during that so we combined our annual visit to the trains and the village with making an ornament.

When we write it all down, it can look busy but when it is all filled with joy and looked forward to, that busy-ness goes away and fun and memory making takes its place. Perhaps it is all in the eye of the beholder.” – Lori, At Home

Jen from Happy Little Homemaker wrote this post about prioritizing during the holiday season. She has also written about how to downsize the Christmas giving without seeming like a Grinch and why she finishes her shopping in October.

Chris at Campfires and Cleats shares six tips for a frugal and less stressful holiday season. You may be surprised at number one.

Tara at This Sweet Life of Mine wrote about the expectations of travelling to visit family. She also wrote a great guest post at Upside Down Homeschooling about keeping Christmas shopping simple.

Remember, no matter your religion, if you celebrate Christmas, it’s supposed to be about family and love. Not wishing you could throw the tree out the window, possibly after setting it afire. I know it’s too late to really help this Christmas, but maybe you can use these ideas to start working towards a less stressful holiday season next year. Because I really love seeing those decorated trees in my newsfeed.