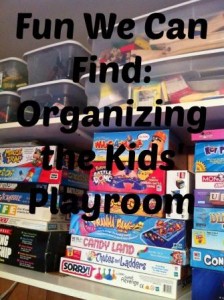 We recently moved back into our former home with the kids’ dad. We are not back together, but because of various reasons, we decided to share a house again. This gave me the chance to clean out the playroom that had not been culled since I moved out two years ago.

It’s a pretty big room, and you could hardly walk through it. The first thing I did was take everything out. Then we couldn’t walk through the kitchen or living room, but the playroom was spotless.

I vacuumed the years of neglect off the shelves and the bins, and restacked those. I use the bins for “sets” of toys. There’s one for the wooden train set, one for all the play kitchen paraphernalia, one for toy cars, one for all the superhero toys, that kind of thing. The bin on the end with paper towel rolls? That’s the “music” box. When they want to play with something, we get down just that bin, and they can only have one bin down at a time. This worked very well when Jack was the only one playing, then resulted in arguments for a couple of years when they wanted to play with different things. Now Jack pretty much only plays with Legos, so it’s back to not being a big deal.

I also stacked all the board games on these shelves. We don’t have a closet in this house we could use for games, so they have to live in the playroom. Besides, if they’re in a closet, you tend to forget you even have them.

We had a tub of baby toys that stayed the playroom for when the grandbabies came over. They don’t come over very often, so I put what would fit, into one tub, put the lid on it, and put it in the basement. When we need toddler-safe toys, we’ll go down and get them. In the meantime, they’re not taking up space in the room. We also had a full bin of Duplo blocks. I posted those on Freecycle. No more often than we need the little-people toys, the ones we kept will do nicely. That got rid of two tubs in the playroom.

I had three small bins that were either empty or only half-full. We have a few “miscellaneous” bins on the shelf for small toys that would get lost in a toy box, but don’t really go with any “set” of toys. I dumped what few toys were still in the tubs, out onto the living room floor so the boys could see everything. Then I used one smaller tub for “dress-up” items: old Halloween costumes, stick horses, light sabers… things they can find easily to “play pretend” or make a movie.

The bigger tub, I wanted for whatever other toys they wanted to keep. My goal (and my directions) were to only have it full enough that a lid could be put on it. This is what we ended up with:

However. Since they left enough toys out to completely fill both a 35-gallon, and a 22-gallon tub — all without crying or complaining– I let the little overflow pass. After the tears and hysterics I’ve endured over the past few years every time I even mentioned getting rid of toys, I was very proud of both boys for being so good about culling the stash.

One thing we didn’t cull was the herd of stuffed animals. We have three cubes and two nets full of stuffed friends. I said before Jack was born that I wasn’t buying any stuffed animals. I did buy one or two over the past twelve years, but most of them came from other people, including their dad. *sigh* And because everything has feelings and is our friend and must live with us forever, they’re not going anywhere anytime soon. 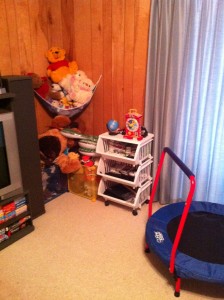 The trampoline absolutely had to stay in the playroom. Blake can not be still. The rolling bins, I used for the video games and controllers. 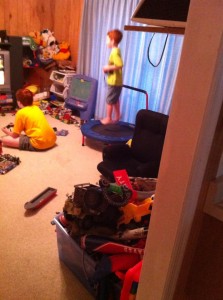 This is why the trampoline had to stay. (This was several months ago, but he still does this. While playing video games.)

The play kitchen also “had” to stay. Jack got it for his…fourth or fifth birthday. He had been asking for one since before his previous birthday, so I was pretty sure he actually did want it. He played with it for years; Blake plays with it. I thought since they were into Legos and video games now, I could get rid of the kitchen and free up some space, so I asked Jack, “Can we get rid of the kitchen?” His response? “No, I’ve got a pie in the oven.” Alrighty, then. So, I found a spot for the kitchen.

The only money I spent on the whole room was for knobs for the old dresser. Everything else (including the dresser), we already had in the house. Instead of buying an expensive Lego drawer set, I used a regular set we had hanging around. It doesn’t have dividers, but they have a couple of smaller cases, and we have ziploc bags. In fact, used ziploc bags (not ones that had food in them) go into the dresser drawer for future Lego use. We don’t use a lot of bags, but we don’t have to throw away bags we’ve used, and we’re not using new bags for Legos. 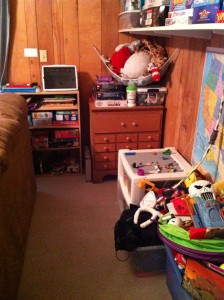 My kids like to save the instruction manuals for Lego sets, so those all go in the bottom drawer of the dresser. Middle drawer is bags of Legos, including a big bag of mini-figs. My OCD child doesn’t want the mini-figs mingling with the other Legos. This is also why there are Lego boxes atop the dresser. The Advent Calendar mini-figs are not allowed to escape their prisons. The top drawer is for Playdoh.

All the puzzles are stacked in the bookshelf. We didn’t exactly have an “extra” bookshelf, but I didn’t have space for it in the living area of the basement, so I put it in the playroom. B isn’t quite ready to give up the toddler-type wooden puzzles, so those are stacked atop each other, while his boxed puzzles are below. 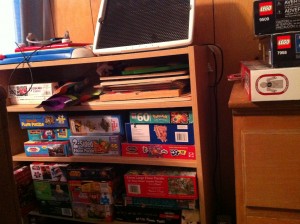 We now have a “playable” playroom!