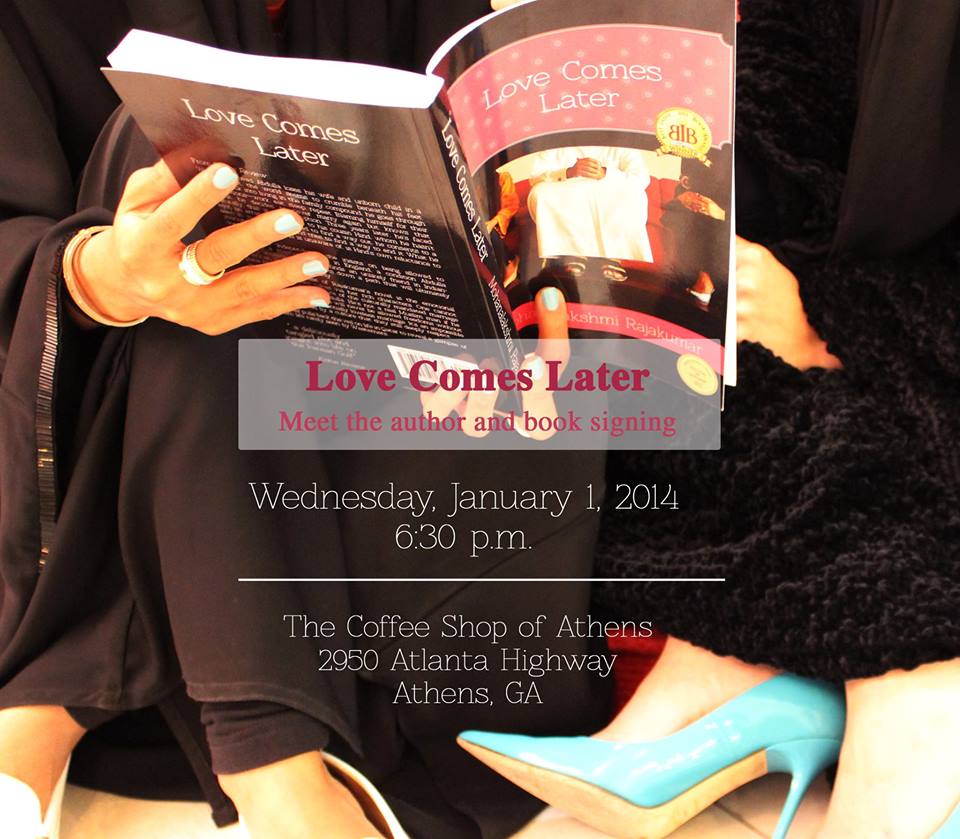 I’m very excited to share that a fabulous author, Mohanalakshmi Rajakumar, will be in Athens, GA, on January 1, 2014! In the interest of full disclosure, I should tell you that Mohana is an online friend and an editing client, but that has nothing to do with her amazing story-telling abilities. I don’t read many books that aren’t romances, but I love Mohana’s books (and as a bonus, some do have a love story!)

Mohana doesn’t just write fiction. Her “momoir” Mommy But Still Me was so entertaining that I loved it both times I read it, and So You Want to Sell a Million Copies? walks authors through the steps they need to acquire a publishing contract. The book also contains more than enough valuable information for all authors to make it worth the purchase price.

Shortlisted for the New Talent Award by the Festival of Romance, this contemporary tale about the conflict between love and honor, duty and passion, will keep you turning pages until the very end.

Hind is granted a temporary reprieve from her impending marriage to Abdulla, her cousin. Little does anyone suspect that the presence of Sangita, her Indian roommate, may shake a carefully constructed future. Torn between loyalties to Hind and a growing attraction to Abdulla, Sangita must choose between friendship and a burgeoning love.

A modern quest for the right to pursue love and happiness, even when it comes in an unconventional package, LOVE COMES LATER explores similarities between the South Asian and Arab cultures while exposing how cultural expectations affect both men and women. Identities are tested and boundaries questioned against the shifting backdrops of Doha, Qatar and London, England.

Mohanalakshmi Rajakumar is a writer who has lived in Qatar since 2005. She has a PhD from the University of Florida with a focus on gender and postcolonial theory. Her dissertation project was published as Haram in the Harem (Peter Lang, 2009) a literary analysis of the works of three Muslim women authors in India, Algeria, and Pakistan. She is the creator and co-editor of five books in the Qatar Narratives series, as well as the Qatari Voices anthology which features essays by Qataris on modern life in Doha (Bloomsbury Qatar Foundation Publishing, 2010). Her research has been published in numerous journals and anthologies.

She was the Associate Editor of Vox, a fashion and lifestyle magazine based in Doha and a winner of the She Writes We Love New Novelists competition. She has been a regular contributor for Variety Arabia, AudioFile Magazine, Explore Qatar, Woman Today, The Woman, Writers and Artists Yearbook, QatarClick, Expat Arrivals, Speak Without Interruption and Qatar Explorer. She hosted two seasons of the Cover to Cover book show on Qatar Foundation Radio.

Currently Mohana is working on a collection of essays related to her experiences as a female South Asian American living in the Arabian Gulf and a novel based in Qatar. She believes words can help us understand ourselves and others. Catch up on her latest via her blog or follow her on Twitter @moha_doha.

In the DC area? Mohana will be there Dec. 21. Check out the Facebook Event Page for details.

I am not being reimbursed in any fashion for this blog post. I’m only spreading word for a friend. This post does contain Amazon affiliate links, but that has nothing to do with the subject of the post.