We don’t do crafts in our house. Jeffrey has never been interested, even when he was in Mom’s Morning Out and when they did weekly crafts in Sunday School. He was probably seven before I realized he didn’t know how to use scissors, because it was never an issue. (Turns out it was part of his motor skills issues, but we didn’t know that then.) And frankly, I’ve been pretty happy with the no-craft thing, because I’m not very creative. I can’t write fiction, as much as I’d love to, because my brain just won’t work that way.

But I just realized a few days ago, that I can be creative sometimes. Jeffrey has always had store-bought Halloween costumes, until he got too big for them. Three years ago, Jeffrey decided at the last minute (after weeks of searching stores for something that fit) that he wanted to be a Ghostbuster. There was no time to order something online and at the time, there was nothing in stores. (We saw a Ghostbuster costume at the Halloween store the other day.) 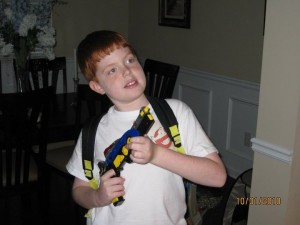 So I spent hours online until I found what was probably the only Ghostbuster logo that didn’t have saving disabled. I put  it on iron-on patches and made him a Ghostbuster t-shirt. He put on his backpack, grabbed a toy gun, and, poof! Instant Ghostbuster. 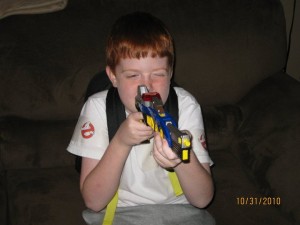 The following year, Bennett wanted to a rabbit. As he started telling me that in July, I had plenty of warning. I just had no idea it would be so hard to find a plain sweatshirt in his size. Everything had hoods or zippers or logos. I never did find a plain one. I had to turn his shirt inside out. Hunting down the ears and tail was another huge undertaking. 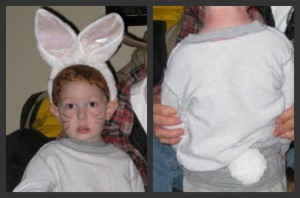 And I have no idea why I don’t have a picture from last Halloween, but once again, Jeffrey waited until the last minute and we ended up making him Pikachu. We found a Pikachu hat at Party City, I got him a yellow sweatshirt at Goodwill, he wore his black sweat pants, and went as Pikachu.

This year, was the first year I had to make up costumes for both of them. Which wouldn’t be a big deal if I had a sewing machine. As I don’t, double-sided fabric tape became my new best friend. Bennett wanted to be a hobbit, and Jeffrey of course changed his mind several times until I talked him into being Shaggy. He already has the longish hair and a green t-shirt. I only had to find him pants, shoes, and a Scooby Doo. Simple, huh?

Turned out it was. We found brown corduroy pants (that fit!) and some brown loafers (that barely fit) on the same Goodwill visit. I found a Scooby for $1 at Goodwill the next day. I had to tie it to his candy bag, because he refused to carry it around. I told him if he had it, everyone would instantly know he was Shaggy. Without it, it just looked like a big kid in a t-shirt. 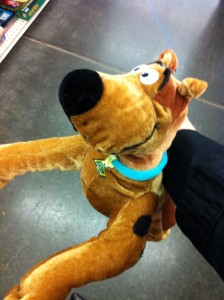 And the hobbit. Wow. I spent a lot of time on Pinterest trying to figure out how to transform my kid into a hobbit. My biggest obstacle was the feet. But I finally figured that out by accident. We won’t even talk about how many thrift stores and went to trying to find him a vest and a cape. I ended up safety-pinning my robe onto him. Kickin’ it old school. Remember when our parents just dressed us in whatever they could find around the house? I had to use fabric tape to shorten his pants.

For his feet, I came across a pair of brown and white fuzzy (women’s) knee socks at Target. We put those over his sandals and I drew toes and hair on them with a brown marker. He won two costume contests. 🙂 I’m afraid I’ve raised the bar for upcoming Halloweens. 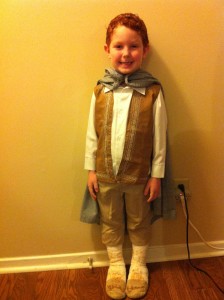 See, just a big kid in a t-shirt

Therefore, I will no longer say that I’m not creative. I will embrace my awesome-ness.

Until next Halloween when I start freaking out again.