Blake has this stuffed dog that is almost as big as he is. This morning, he was playing with it, and grabbed it and ran into the bathroom, then immediately came back out, saying something like, “You made it just in time!” (I’ve learned not to ask too many questions.) Then he told me that he tied the dog’s ears behind its head while it was using the bathroom.
Me: Um, why? They don’t really get in the way.
B: I’m just being realistic.
(See why I don’t ask many questions?) 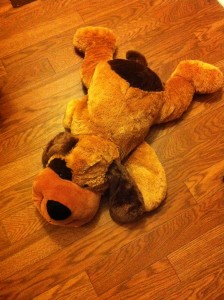 Me, as we walk out of Kroger: We saved $14 with the coupons! [I didn’t have to clip them. They came in the mail, including several for free items we use every week.]
J: Good. You can use the $14 to buy $15, and the $15 to by $16, and–
Me: WHAT are you talking about? That doesn’t even make sense. For one thing, where would we buy money?
B: At the dollar store.
My children are Abbot and Costello.

B: At least I’m learning a lot of stuff now.
J: From what?
B: From being five.

Blake was refusing to believe it was cold out. Something about how it was warm on Halloween so it must still be warm after Halloween. He said he’d wear shorts and a Tshirt and “just deal with” the cold. So I opened my back door (so no one could see him) and he stood there in his underwear.
As soon as I opened the door, “This isn’t cold. I can deal with it.”
“Stand there a little longer.”
One minute later, “That’s long enough. Now go put on some pants and a long-sleeve shirt.”
“Okay.” He walked off rubbing his hands together, “I’m just doing this because.”
I think he finally believed it was cold outside.
Then he said,”You know the cold doesn’t bother me. Well, just my hands.”

B: So is it still going to be a long time before I die?
Me: Probably. No one except God knows for sure, but most people live to be pretty old, so you probably have a long time, still. Even daddy and me. I know we seem pretty old to you–
B: *You* don’t.
Ha!

The lady at Kroger asked Blake if he was going to eat all the candy he gets. His response was, “My mama likes chocolate.”

B: Will you get me something to drink? Anything you pick.
I grabbed his water cup.
B: No, not water.
Me: So anything I want, except water?
B: Yes. Or milk. Not milk.
Me: So anything I want, except water and milk? So, not really anything I want. How about V-8? (He doesn’t like regular V-8.)
B: No.
He walks over to the pantry.
B: You were supposed say, “tea”.
Me: Why would I say, “tea”? I have to work to make that. If you wanted tea, why didn’t you just say so? What flavor tea do you want?
B: Just pick a random flavor.
*sigh*

Jack couldn’t get the key to unlock the front door. I walked up and turned it.
J: How do you DO that?
B: Mama has THE POWER.
Yeah, let’s go with that.

B: Nobody talk. I’m trying to hesitate.
(I believe the word you’re looking for is “meditate”, son.)

We were in the store the other day and saw a baby. I said something about “her”, and Blake asked me how I knew it was a girl.
“Well, she had a bow in her hair, so I’m just assuming it was a girl. I don’t know for sure.”
“Boys can have bows in their hair, too.”
I thought, “Okay, he’s picked up on some equal opportunity stuff somewhere.”
Then he said, “Boys have blue bows and girls have pink bows. So was it a pink bow or a blue bow?”
I will never figure these children out.

Blake, on his current math program: I’m almost finished with pre-k. Then I’ll do kindergarten, 1st grade, 2nd grade [up to 8th grade], then I’ll do Geomagy.

Overheard:
Jack: I hate it when I’m playing Growtopia and I misspell something and someone tells me I’m using improper grammar. That’s not bad grammar! That’s bad spelling!
His rant continued: Doesn’t anyone know the difference between spelling and grammar these days?
Because he’s so old…

A few weeks ago, we went on a tour of a local police department with our homeschool group, and we got to meet a police dog. Because of Blake’s fear of dogs, I attempted to reassure him, “Don’t be scared of the dog. He’ll be on a leash, and he’s better-trained than you are.” The other moms thought that was funny. So did the other officers and staff that were standing behind us. Oops.

On the way to the PD for the tour:
B: Why are we going to the police apartment?
J: To drop you off.
*sigh* He’s such a big brother.

I let the boys play in the rain at the park, and when they came back to the car, Jack felt the need to tell me, “This isn’t sweat.” Thanks, son. I wondered why my car was sweating.

I was trying to cook an egg, and when I went to check on it, realized it wasn’t cooking because I hadn’t turned the burner on. Then this happened because my children aren’t the only weird people in this house:
Me: You know, the egg won’t cook unless you turn the burner on.
Jack: I know.
Me: Then why didn’t you turn it on?
Jeffrey: Because I wasn’t cooking the egg?
Me: Neither was I.

Look! I got a box of packing peanuts!
B: Why did you order those?
A minute later:
Is there something under them? 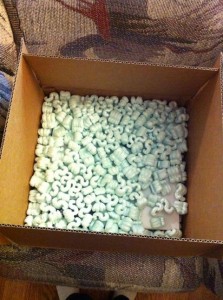 We were talking about belly buttons, and their various shapes and styles.
Me: It’s just about how the spot healed when the cord was cut.
B: What’s a cord?
Me: It’s how the baby gets food and nutrients when it’s inside its mommy.
B: So I was inside you?
Me: Yep. (We had a variation of the inside mommy conversation the other day.)
B: How did you make me?
J: You’ll find out when you’re older. And so will I.
I had to laugh. I thought Jack already understood about the basics of sex. We’ve talked about it before. I usually just answer their questions. Apparently it doesn’t quite register….

I got a new bed a few weeks ago, but I got it a day later than planned, so I had nowhere to sleep for one night.
Me: You know, if you were a good son, you’d sleep on the couch and let the old woman sleep in your bed.
J & B: You’re not old!
B: Thirty isn’t old!…How old are you?
Not sure if there was a compliment in there somewhere or if they just don’t want to give up their mattress….
(I’m several years past thirty, and Jack ended up volunteering to sleep on the couch that night.)

So, here’s how things go around here: Jack doesn’t want to try something new, I push him a little, he enjoys the new experience. It happened at the police station tour. He didn’t want to go; I dragged him along with me, because I wanted to go, and as we were leaving, he told me, “That was fun!”
“I’m sorry. What? I couldn’t quite hear you.”
“Oh, man! You did it again!”
So, after refusing to try strawberries with chocolate, and telling us how nasty they would be, he finally tried one. And liked it. At first I didn’t have my phone on, but then he asked if I was recording him, so I decided to. And, yes, he is now aware of this recording. There is no visual because my phone was on the floor beside me. Also, yes, we were both laughing.