I’ve posted several times over the past few months about decluttering. I’m not talking about just cleaning out a closet. I’m talking about 30+ moving boxes of junk that I’ve moved around the country with me — some of them for 26 years. I have two boxes left that I didn’t get to before I moved again this week. My ex-husband found four small boxes (mostly books, of course) and one large box (only part of the contents were mine) that I left when I moved out. Because I couldn’t find all my stuff because we had too much crap stored in the basement.

I grew up in a very cluttered home. Not dirty. Just cluttered. Well, some of the shelves were dusty, because who has time to dust four million what-nots? (I exaggerate. There were probably only three million.) I was just as bad. I collected unicorns. And Precious Moments figurines. And those cute Avon perfume bottles. And Garfield toys and figurines. And books. Lots and lots of books. Everywhere. My mom had lots of those, too, And by “too” I mean both of us had way too many books.

I was in my late twenties before I started even thinking about getting rid of anything. It had never crossed my mind. It didn’t matter that some things had been boxed up the first time my family moved when I was twelve. (If you’re really clever, you can now figure out how old I am.) Then we moved again six months later, in another cross-country move. Again, three years after that. I moved three times within the same town, then once to another state, and every time I moved, more stuff got put in boxes, and less stuff came out of those boxes. Who needs thirty boxes of anything? (Unless it’s chocolate, then we can talk.)

I went through some of the boxes, donating things, tossing some — and labeling and resealing half-full boxes. Why? I have no idea.

A couple of years later, I started selling my figurines and unicorns on eBay. I had so many that even after years of stumbling across them and selling who knows how many, I still found a large box full of Garfield figurines this summer.

So, here I am, moving again, and even after getting rid of all the stuff over the past few months, I still have So. Much. And I just don’t need this much stuff. And that’s just MY stuff. I can’t even talk about the kids’ playroom. When we moved here, Jack was 2 1/2, and there was one small bin of toys. Now we have two long shelves (8-10 ft) full of small bins–used to sort the small toys–as well as four huge bins on the floor — all of which are mounded up with toys. And the 50+ stuffed animals. And the thousands of Legos. All over the floor.

My ex has major hoarding issues, as well, and now that I’m back here (living in the basement — I seem to be forever living under other people), I’m reminded of how bad he is about that. So we all need work. X claims he wants help cleaning out, but the only way he’ll actually get rid of stuff is if I lock him out of the house and throw it away myself. It’s not my stuff to throw way, though.

But I can only start with myself and see what happens. Mainly because I’m so tired of trying to find places for all my stuff. I had two ebooks downloaded (collecting free ebooks was something I had to stop because I realized I was hoarding free ebooks as if there would never be enough to read) about minimalism so I read them both tonight. Don’t be too impressed. They were both only about 100 pages. They are books about minimalism after all. (Neither of these are free now. They were $2.99 each at the time of this post.)

I preferred Luxury of Less: The Five Rings of Minimalism

by Karol Gajda. It’s written in kind of a chatty style, talking about his personal journey, and each chapter has a 30-day challenge, only one of which is to get rid of “stuff”. This book is more about your mindset.

The Art Of Minimalist Organization: The Minimalist Way To Organize, Clean, And Keep Your Home Spotless

by Ben Night is more about a step-by-step process of how to remove stuff from your home and neatly store the items you do keep.

Both books are helpful in their own way. Minimalism stresses quality over quantity and being happy with your life and grateful for what you have rather than constantly wishing for more stuff, thinking that it will make you happy. Not that you can’t buy new things, but you make fewer purchases, and each one has a purpose — no impulse buys.

So, I’m looking around at the things I have here already and thinking about all the boxes I have yet to bring over from the apartment, and a good chunk of it is homeschool-related. I kept all of Jack’s old books in case he wanted to look back over them, or in case Blake wanted to. We have oodles of stuff for science experiments, and while neither kid is into crafts, Blake does like to draw, so we have all the paper, crayons, markers, pens, and pencils a kid could want. 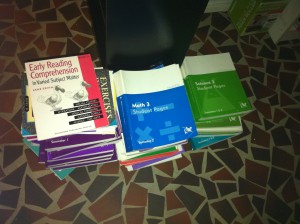 Just *some* of the books I’ve kept “just in case”. Not sure if you can tell, but there are about 15 books in each stack.

We won’t even talk about the regular books these kids have. We could easily open our own little library here. (I’m not exaggerating this time.)

Then there are the puzzles and board games that every family has. Well, Blake really likes puzzles, so we may have more than our share of those, too.

One of the first things that set me on the path to decluttering and simplifying was reading something FlyLady wrote. At least, I’m pretty sure it was her. (And whoever it was, I’m paraphrasing.) If you’re a Christian, and you believe God will meet all your needs, then why do you hold onto things you don’t need or use “just in case you need it” ten years from now?

But I’m wondering if it’s possible for a homeschooler to be a minimalist? How much stuff do we really need to homeschool? I’m not talking about how much or how little to spend. I’m talking about how much stuff we keep around. I’m not quite ready to dump all the stuff yet — even the old school books, but it is something to consider. I have no trouble getting rid of clothes or shoes (just not the boots – I may need a boot intervention), but I can’t get rid of anything that is remotely educational.

Which would probably be fine if I didn’t see pretty much everything as educational.