After dealing with my water issues, I thought everything would be easy for the next few months, maybe even years. (One can hope.) Then I glanced at the peephole in my front door and saw this: 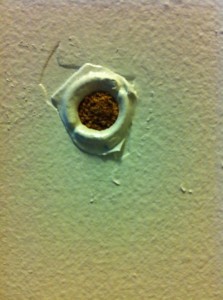 It looked like a cork stuck in my door. Before I touched it and smeared it, it was actually a nice little spiral. I couldn’t tell for sure, but it seemed like dirt or something. I was really freaking out, and when I took some trash up to the dumpster, I stopped by the leasing office and showed the picture to the property manager. She was curious, too, and we set off with a screwdriver.

This is what we found: 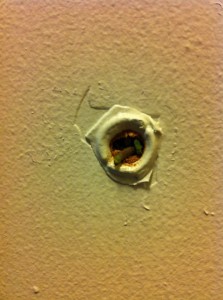 Turns out it was wasp larvae. There were a lot of them in there. She dug several out and put them in a clear bottle to show the exterminator so we could find out what they were.

After she left, I taped up the hole. She said she’d send one of the maintenance guys down to clean it out and put in a new peephole since the glass was gone from mine. (That may have been the scariest part: that the wasp somehow did something to the glass.) So, there is tape, then cardboard, then more tape. I was taking no chances on waking up to a house full of creepy-crawlies. 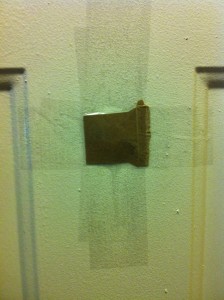 The outside had been open before we did this. When we broke through and sealed off the back, the mama came and filled in the outside of the hole. 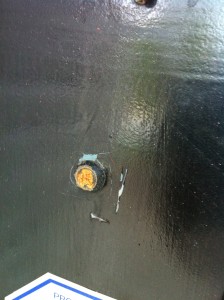 The next day, I had a new wasp- and larvae-free peephole. 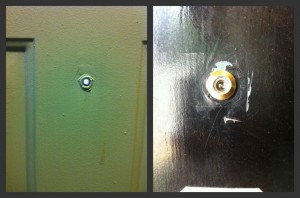 About two weeks later, I had a run-in with a cute and cuddly insect. I’ll tell you about that one later.