I’ve told you about our trip to Daytona, and the fun I had when we got back. But wait! There’s more! It’s like a bad dream that won’t end. If I believed in a water god, I would wonder what I had done to make him mad.

We took my ex’s truck to Florida, and I left my car at his house. When we came back, it was in the midst of a torrential rain storm. It was pouring rain, and the lightning and thunder were horrendous. Bennett was scared to get out of the truck, but he was so scared of the storm that he was hiding in the back floorboard, and we had to drag him out.

But first…. His dad went in the house to get an umbrella. He was gone several minutes, and I thought it was just taking him a while to find one. No, that would be too easy. He came out with an umbrella and told us, “A tree fell on the house. My bedroom is soaked.” Sure enough, there was a big hole in the roof, and he ended up having to replace the whole bedroom floor, and part of the ceiling, roof, and wall. Good times. I didn’t have to deal with that directly, obviously, but we did get to juggle kids because suddenly I had only one bedroom, and so did their dad.

What you can’t see in the pictures is the water still pouring in as it rained. 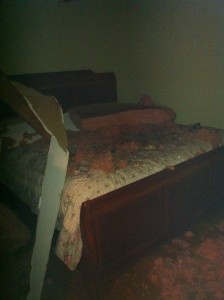 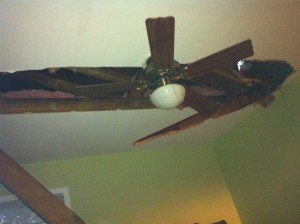 You can see part of the actual hole in the roof in this picture. I couldn’t get any closer because of the debris. 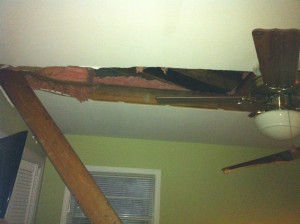 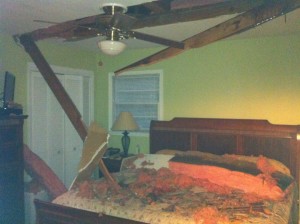 Fortunately, the water issues seem to be over for now, and I’ve now moved on to insect problems. And these aren’t your typical insects problems. Stay tuned for The Insect Chronicles.