I went upstairs, and again, they refused to open the door. So I haven’t had good experiences with water and the neighbors since I’ve been here.

So, we drove to Daytona Beach on Monday, and had a fun couple of days. Wednesday afternoon, I took a nap, and woke to a message on my phone from my property manager. The details were sketchy at the time, and even knowing the details now doesn’t really matter. What matters are the results. Which were that my apartment had been flooded, and my dining room ceiling had collapsed.

My bedroom ceiling was still intact, but water had come through the ceiling and walls, so my carpet was soaked. 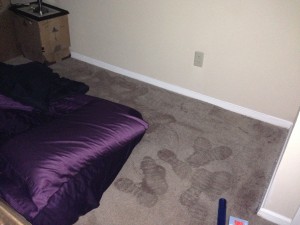 And overnight, my living room ceiling fell in, so this is what they found when they came in the next morning to work on the floor. 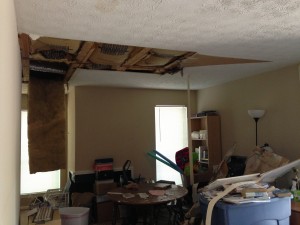 My printer had been sitting in the dining room floor and was completely ruined. The drywall got so wet that the vent hood fell off the wall. 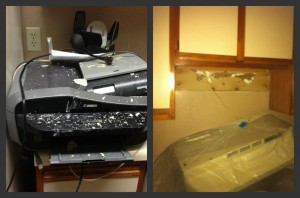 Just to answer a few questions: 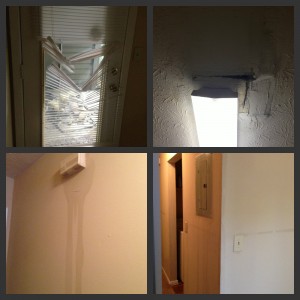 We were going to come back to Georgia early, but there wasn’t really anything I could do until they made the repairs, so we stayed in Florida. We did NOT tell the boys. None of their stuff was damaged, but they would have been very upset and worried about their things and the apartment.

When I got back, management put in me another apartment temporarily. So what happens, the first night I’m there? I had to call maintenance at 11 PM, because there was water dripping from the kitchen ceiling. I kid you not. How could I make this stuff up? Turned out to be a leak in the icemaker line in the apartment upstairs, and was easily dealt with.

It took two weeks for them to get my apartment ready for me to move back in, and another month for me to finish sorting through everything. (Remember all those boxes I needed to go through to declutter? Yeah. They were still sitting around.) I have a new floor, and I can actually see it now. (Decluttering photos coming soon.)

But wait! This isn’t the end of my water drama! Yes, there really is more. How is that possible, you ask. Believe me, I asked the same thing.