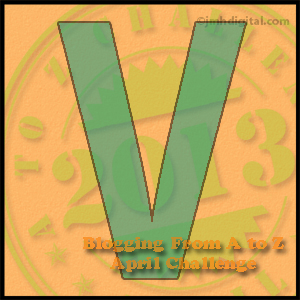 V was just not happening for me, so I turned to my friends and followers for a little help. So this post is a collaborative effort. Thank you to everyone who suggested ideas.

Very Sad – I was very sad to hear about George Jones’ death this morning. I still can’t watch the video of “Who’s Gonna Fill Their Shoes” without crying.

Toni suggested violin and vest. I’m from the South. It’s not a violin; it’s a fiddle. And vests are weird. What’s the point of  a jacket with no sleeves?

Jennifer suggested Visa bill. Ha! No. We’re not even going there.

I threatened to post a picture of my vacuum cleaner if I didn’t get any ideas, and Jessica replied that “I’d totally take vacuum, if it’s an awesome one.” Sorry, Jessica. It’s not awesome. You can still have a picture, though.

Yes, I have blue tape squares on my floor. Don’t you?

Melanie suggested variety as it relates to autism. Which is cute because she knows as well as I do that you can’t even put variety and autism in the same sentence (well, except this one… and the first one).

Marci, who once spent several hours patiently listening to my Aspie son talk about Star Wars and Legos… and Lego Star Wars…asked if there was a Star Wars character that started with the letter V. There are several, most notably Darth Vader, but alas I am not my son, and therefore have nothing to actually say about said characters.

Karen suggested vigor, vitality, and vibrant. Obviously she hasn’t been following my posts on my health blog about my fitness challenge, or she wouldn’t be suggesting any of those words to me right now.

Valerie suggested vichyssoise. Because “I just like saying it.” Yeah, well, I like saying “verisimilitude” but you don’t see me writing about it, now do you? She does get a pass, though, because her name starts with V.

Angela suggest violet. Now that’s a word I can get behind. It’s close to purple, which is my favorite color. Good job, Angela!

And Sharon… I don’t even know what to do with her. She suggested velodrome velocipede village. Yeah, see? It’s not just me.

Sherry suggested vervain, which I’m pretty sure she is familiar with as a healing herb, rather than a vampire repellant. (Hey! Another V word!)

Cynthia suggested vice and vibration (as well as the aforementioned vampire), but I have to say that she’s the one I expected to suggest a totally different V word.

Jeanette, Elissa, Lee Ann, and Jennifer all suggested victory (with Carma sliding in with victorious) – I suspect my dear friends are referring to the battles I’ve fought over the past 17 months – and come out a little bruised inside, but victorious nonetheless.  However, when I hear “victory”, I can only think of the song “Victory in Jesus”, which actually is pretty much the same thing as the first part.