Okay, not just him, but none of his friends’ names start with L. Saturday night, I attended my first concert in a very long time. Not only was it a great night, but it was also an historic event because it was the first concert ever held at Sanford Stadium in Athens, GA. But you know what was cool? Jason Aldean headlined the tour, but he was not the first singer to ever perform a concert there. That privilege went to Thomas Rhett, who opened the show.

The only low points were the scary climb to our seats (we were four rows from the top and the stairs were skinny!) and the drunks sitting around us. They weren’t even selling alcohol in the stadium. Half the crowd came in drunk from tailgating before the concert. Really, folks, if you can’t control yourself, stay home. Other people paid to see the show, too.

In case you’ve never had the opportunity to sit in the “nosebleed” seats, let me show you what you’ve been missing. 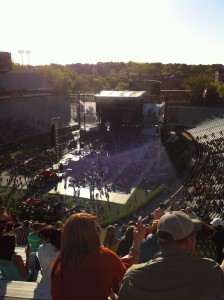 That’s Thomas Rhett on stage. See him? No? Try harder.

And this is Jake Owen. I hear he was barefoot. I’ll have to take their word for it. 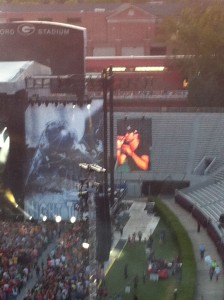 The sun finally went down so we could see Luke on the screens. 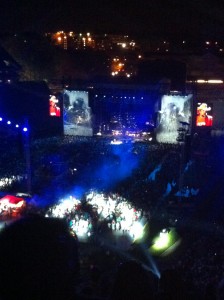 We really did have a great time, and any seat in the stadium is better than not being there at all. LOL