Not only have I made through almost all of this challenge, but this is my 700th post on this blog, almost all of those written since April 2011. I’m pretty sure that means I talk too much. So I’d like to say, “Thank you!” to all my readers, because without you, I’d just be talking to myself, and I’m not sure I could stand myself for that long.

Yes, this is a day late. It’s late because I didn’t want to write it. I’ve been putting it off, but it won’t go away. That has to be the worst thing about being a writer. If something wants to be written, it won’t leave until you’ve written it. I suppose artists of various genres have the same problem. There were several letters last week that I thought about using, but I managed to come up with things that I “just had to use” for those letters. This one could wait. Then, there was S. I could have used Sadness, but I didn’t want to. I’m not even entirely sure what I’m going to write today; I just know I’m not allowed to put it off anymore.

Sometimes it seems like horrible things are happening all around us. Last week, it was the Boston Marathon bombing, then the West, Texas explosion. And did you catch the news about the earthquake in China? We’ve got terrorists in the Middle East, bird flu in Asia, and just this morning, a building in Bangladesh collapsed, killing almost 100 people. Add the “everyday” tragedies of one-on-one murders, fatal car accidents, fires, and other sad events, and it can be enough to make you want to hide in your house with the TV and radio off for…ever. 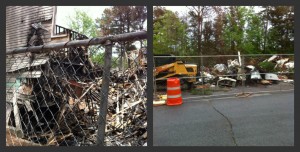 My neighbors’ home recently burned down. Tragedy is all around us every day.

I don’t recommend hiding in your house, but turning off the TV is probably a very good idea. When you’re feeling overwhelmed by all the bad news in the world (or in your own city), take some time to focus on the good things. There really are more good people than bad out there. There is more happiness and love than hatred and selfishness. Sometimes you have to look for it because – for whatever reason – negativity screams louder. But it’s there.

So go hug your kids. Snuggle with your pet. Call your mom or your sister or your best friend and spend some time talking about silly stuff. You too, guys. Go do happy guy stuff (whatever that is). Seems someone, somewhere said, “Don’t worry. Be happy.” I think that is very good advice.