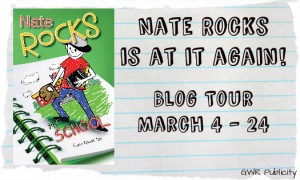 According to Nathan Rockledge, fifth grade has plenty of perks. Oh sure, there’s more work and that know-it-all, Lisa Crane, is still around – but, there’s a lot to look forward to as well: a laser tag birthday party, baseball at recess, and even a cool Halloween dance. Of course, all of that means nothing without the biggest perk of all . . . the class trip to New York City in the spring. If Nathan’s class can raise enough money to go, that is.

Give Nathan paper and a pencil and watch as his imagination turns him into Nate Rocks, hero and fifth grade super star. With adventures abound, Nate saves the day time and again. But will Nate be able to save the fifth grade trip?

Join Nathan, his hilarious family, and his friends, as he rocks the school in another fun Nate Rocks adventure.

Karen has me hooked. I love a good romance as much as the next girl, but sometimes I just want something that’s fun and filled with a little less drama. Something that takes me back to being a kid, and even gives me a little insight into my own kids. I even sent Karen a message after reading a line telling her that I actually laughed out loud because it sounded exactly like something an eleven-year-old boy would say. (Jump over here to see what Karen has to say about the eleven-year-old boy in her head.)

I was eagerly awaiting the third book in the Nate Rocks series, and I was not disappointed. In Nate Rocks the School, Nate and his friends are frantically trying to raise money for the class trip to New York City. (Can’t wait to read about that trip! No boring vacation slide shows for Nate.)  Babysitting, car washes, trips to the mall… Let’s just say that Nate & Co put the “fun” in fundraising.

Part of the reason I was so eager for Karen to finish this book was because my eleven-year-old boy was driving me crazy asking when it was coming out. When I told him back in February that I had to read the book before it came out, he didn’t bat an eye. I couldn’t figure out why he didn’t ask to read it, too. (I wouldn’t have let him; it was an ARC and I wanted him to wait and read the published version.) A  few days later, I asked him why he hadn’t asked to read it. His response: “You have it already?!” Well, that explains so much. 😉 I did end up letting him read the ARC because I needed his opinion for the review.  So after forcing me into author-stalking for months (good thing Karen and I are fb friends; makes the stalking much easier), what did he think of Nate Rocks the School? “I liked it, but I liked Nate Rocks the Boat better because the girls weren’t in it as much.” Mind you, he likes it enough to bug me about buying the paperback. (A paperback copy will be ordered this week.)

About the book:
Title: Nate Rocks the School