For several years, I was embarrassed to say I was a Christian. Not because I was ashamed of God, Jesus, or my own convictions, but because of the way other Christians acted. I’m not talking about obviously-not-Christian groups such as the Westboro group; even someone with a minimal knowledge of the Christian faith would know that group is more intent on spreading hate than God’s love. No, I’m talking about the well-intentioned, usually loving, Christian-next-door. However, I recently realized that if some of us don’t stand up and say something, people are going to continue to be pushed away from God and His love. We all know of Christians who have left the church because they faced too much judgement and harsh advice and not enough grace, love, forgiveness, and closed mouths. And I have to wonder how many have been on the ledge, ready to jump into a life with God, but the person who could have held their hand and mentored them in their new journey instead pushed them away. God is big enough to handle our stupidity, so there will be someone else later to help, but why should that be necessary?

So after much prayer, scripture hunting (to ensure that the Bible actually says what I think it says), and consulting with other Christians, I’ve compiled a list of stupid things Christians say. These are in no particular order. Join me as I invite Christians to open their hearts more and their mouths less.

1. Barack Obama is not my president.

Um, really? Let’s ignore the political and legal aspects of this and focus on the biblical. The bible tells us to submit to our laws and rulers unless they directly contradict God’s laws. President Obama has never required me to do anything that went against my convictions. I don’t agree with all his policies, but my objections are not biblical ones. And if you are a Christian, how can you not believe that God put Obama in office? I know you prayed for the presidential elections. And I’m sure rather than assuming you know best, and praying for a specific candidate to win, you prayed for God to put the best person in office and give him the wisdom to govern well. You did pray for God to put the best man for the job in, didn’t you? I thought so.

Yes, everyone I know wakes up one morning thinking, “I wonder what I can do that will make people hate me, sneer at me in disgust, and call me really ugly names. Ooh! And if I work this right, I can probably find someone to douse me with gasoline and set me on fire!” Come on, folks. Even in today’s society, exposing yourself as a homosexual is most likely a terrifying experience. They’re taking the chance of losing the love and support of their family and friends, and opening themselves up to a lifetime of bullying and discrimination. Who would choose that? How about instead of verbally slapping them in the face, you give them a hug, and invite them to church (if they’re looking for a place to feel safe — and you attend a loving church) or even just out for coffee or over for dinner. Being gay isn’t contagious. They’re not going to corrupt your kids. They want to be loved just like you and everyone else.

Where to start with this one… Okay, we all do know that that Jesus wasn’t actually born on December 25, right? The Catholic Church took over a pagan holiday in an effort to tame the natives (so to speak). So, it really wasn’t our holiday in the first place. We stole it. But, we do celebrate Jesus’s birthday on December 25, so let’s work from there. If you’re reminding yourself to keep Christ in Christmas, that’s fabulous! If you’re talking to other Christians, that’s probably okay, too. It’s important to remember why Christians celebrate Christmas. But, you know, Jesus isn’t the reason for the season for everyone. And really, Christmas has become so far from a religious observance, it’s kind of ridiculous that even Christians are making such a big deal about this while stressing, and spending hours driving around to find the perfect gifts to spend hundreds or thousands of dollars on.

I’m going to throw the “Happy Holidays” mess in with this one. There are several holidays in December, not all of them Christian. There are other religions, even in America (gasp). Even if you only acknowledge Christmas and New Year’s, that’s two holidays. Saying “Happy holidays” does not mean someone is trying to pretend Christ doesn’t exist. It most likely just means that they want to use a cheerful greeting that will make everyone smile. If someone wishes me Happy Kwanzaa, I’m not going to be offended, but as I not only don’t celebrate Kwanzaa, but am not even sure when it is, it won’t be as meaningful to me. If someone tells you, “Happy holidays” just smile and return the greeting as you choose. No complaining necessary. If someone else can take the Christ out of your Christmas then you have bigger problems than which greeting a stranger uses. 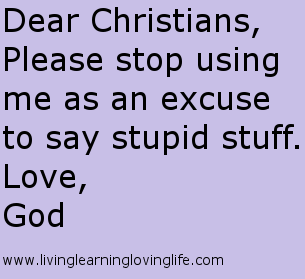 4. Put God back in schools.

Ah, hmmm…okay. Maybe there is some confusion, because the God I serve goes pretty much wherever He wants. The schools are full of students and staff who love God and no one is keeping them from praying anytime they choose. What was banned was teacher-led prayer. Let’s think about this from another perspective. If every school started teaching a Muslim (Islamic? I’m sorry. I’m not sure of the proper use here) curriculum and having teacher-led prayers to Allah at the appointed prayer times, I’m pretty sure you would be freaking out. So how about we acknowledge that there are different religions in this country and that there are some places that are not appropriate for organized religion to be in. But God doesn’t need an organized prayer group. You’re insulting God every time you say he’s not allowed in schools.

5. I don’t have to recycle because Jesus is coming soon.

I…what? First of all, no man knows the time. It could still be a thousand years from now. Humans will not likely still be here then, but still… Second, God expects us to be good stewards of the earth and the creatures on it. Piling up more and more garbage that is toxic to both humans and animals is not being good stewards.

I have a couple things to say on this topic.

1) I’m sure God does dislike families being torn apart. I’m going to venture a guess and say that most everyone does – even people who get divorced.

2) If the person cares what God thinks, it’s a safe bet that they’re already aware of this, and don’t really need you to tell them.

What they need is love and prayer for wisdom and guidance, not judgement and your version of what God wants them to do.  I spent years listening to people tell me “God hates divorce” while I stayed in an abusive and miserable marriage.( “It’s the wife’s job to lead her husband to Christ” is another lovely line that’s corrupted and thrown out in such times.) When I finally started listening to what God wanted me to do and stopped listening to others tell me what God wanted me to do, doors flew open and there was no doubt that I was taking the right path. You have no idea what’s going on in someone else’s marriage. You just love them and let God take care of it.

7. If you just have enough faith, you’ll be healed.

Yes, God healed many people in the bible. But he’s not a genie and he doesn’t always take away our problems. Faithful Christians die.  Bad stuff happens and God doesn’t always fix it. Jesus begged for God to remove the necessity for his death. Paul knew that his “thorn” was not going to go away. My grandparents who were both very faithful and spiritual both died of severe illnesses. Saying this to someone who is already hurting is rude, mean, and untrue.  Another point here is that sometimes we have to stand in the gap for others. There will be times in every Christian’s life when they just don’t feel like God is listening, or maybe that they don’t deserve for God to listen. Remember when the group of friends lowered the man through the roof so Jesus could heal him? Yeah. Sometimes, you just have to help a brother (or sister) out.

Raise your hand if hearing this has ever made you feel better after a loved one died or you experienced a major tragedy. Yeah, that’s what I thought. No matter what you believe, this is never the correct thing to say to someone who is bawling their eyes out. If your relationship is close enough, you just say, “I love you” and give them a hug. If not, then just say, “I’m sorry.” Hugs are optional, but will usually help.

9. If you don’t believe in God, you’re going to Hell.
1) The bible says that even the demons believe in God, so that’s not really helpful.
2) If someone doesn’t believe in God, they probably don’t believe in hell either. If you’re determined to convert them rather than just showing them God’s love and letting him work in their heart in his own time then you’ll do more good by just leaving them alone.
The bible does not tell us to beat people over the head with scripture. We are to show them God’s love, let his light shine through us, and in fact, if they are not responsive, we are to wipe the dust from our feet and move on. There is no nagging in the bible.