I’m not sure I even know where to start. I’m far from perfect and I’m not always nice or polite (though I try), but it hurts my heart to see and hear people intentionally being mean to other people. Usually for no better reason than that they don’t share the same opinions. Sometimes, it’s not even intentional. I’ve done it myself. We write something on Facebook or we post a fabulously witty photo we saw on a friend’s wall, and we don’t stop to think that we’re actually talking about human beings. If you’re a Christian, then you should know that all humans are God’s children, and none of us are above others. As far as I know, all other religions teach love and kindness as well. There’s a reason for that. Humans can not live without kindness. You know, that whole “Treat others as you would be treated” thing. Crazy, I know.

The latest debate on Facebook revolves around businesses starting Black Friday sales on Thanksgiving night. (Thanksgiving is  Thursday. If you don’t see the problem there, think about it for just a minute.) There are those who are disgusted by the greed pulling employees away from what may be one of the few times (or only time) a year that they can be with their whole family. Many of the employees aren’t happy about it, either. Then there are the people who are comparing Wal-Mart employees to soldiers who can’t be stateside during the holidays. I think that’s comparing apples to oranges and is an invalid argument.

There are levels of necessity of service.

At the top we have military, police, fire, and emergency workers. Hospital staff. These are people we could not live without.

Then there are vital, but not life-saving services like hotels, airports, and gas stations. These people make it easier for us to travel during the holidays, and as this is when most people travel, they pretty much have to work during the holidays.

Next we have convenience services like grocery stores and pharmacies. It’s nice to be able to run out and get that stick of butter you forgot you needed or the cough medicine to bring a little relief. These are not required on holidays, but they make our lives easier. We could make it one day without them, but since I always end up running out to one or the other on Thanksgiving Day, I will request that they stay open. (I told you I’m not perfect.)

At the very bottom is retail sales. No one needs a 46″ TV to survive.  That doesn’t mean those workers are less important. It means they can take one day off and the word will not stop turning.

I don’t blame minimum-wage workers for not wanting to work leave their families on Thanksgiving to go work Black Friday sales on Thursday because  people who are probably completely polite and wonderful elsewhere become rude, disgusting pigs in retail stores, especially when there is a discount involved. Every year it’s pushing, shoving, and people getting killed by mobs who are more concerned with getting a good deal than their fellow humans. I worked at Kohl’s a few years ago and had the closing shift on Black Friday. Now, even on a good day, customers leave their manners at the door. (I wrote about that in a post titled Fitting Rooms or Pigpens?.) Black Friday is a hundred times worse. There were huge piles of clothes in the changing rooms. Clothes on the sales floor. Clothes piled on top of racks. It took us two hours longer to close on that night than it usually did. 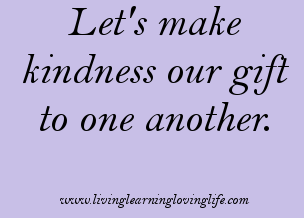 No, I don’t blame them at all. Wanting to spend one holiday at home with their family does not mean these workers are not grateful for their jobs or that they are not grateful for our military or emergency workers. Why is it so hard to just take something for what it is, rather than saying, “You are not allowed to be unhappy because someone else has it worse.”?  It’s a balancing act, I know. We do need to be grateful for what he have and acknowledge that others have even less. But just because someone else “has it worse” doesn’t mean our  lives are perfect. It’s okay to acknowledge that, too.

We all have our struggles. Can we acknowledge that and try to be kind to each other? Instead of telling retail workers they should “shut up and be grateful” (yes, I’ve seen that exact phrase), let’s try a little compassion. Especially if you have the day off. Stay home with your family on Thursday evening. If the stores don’t have a huge turnout, they won’t open early next year. Instead of  joining the mobs and mile-long lines on Friday, shop online or shop at small local businesses.

If you do go out to the stores on Thursday or Friday, remember that both the customers and employees are humans. Be kind to your fellow humans. That Wii U is not important enough to trample someone for. The man waiting beside you is more important than a new big screen TV. The woman you want to push out of your way is more important than a half-price sweater. Those “great deals” you’re snagging are not more important than the cashier who is not working as fast as you think she should.

Thanksgiving is the beginning of the holiday season. Let’s make kindness our gift to one another.

(Note: Skimlinks will probably monetize a couple of these terms. I don’t know how to turn it off for just one post.)