Liss Thomas was born and raised in Georgia without inheriting a Southern accent. Now she travels with her husband’s job across the country. She started writing a few years ago after having a vivid, grape soda-induced dream! That lead to a 75K manuscript and a new obsession to write fun fiction.

Coke or Pepsi?
Coke, Actually used to work for the company.

If your book became a movie, who would you cast?
My 15 female lead, Missy would be Elle Fanning and my male lead would be Ben Barnes, at least in human form *wicked smile*

Do you work another job when you are not writing?
I used to work in Finance but currently am traveling with my husband’s job and writing full time.

How long have your been writing? Was it a dream, a goal or is it just a hobby?
I started writing in high school but didn’t think too much of it. A few years ago I had a very vivid, grape soda induced dream. It was such a fun dream penned a 75K manuscript. I took advise from the internet to put my ms in a drawer and then come back to it. While I was waiting, I started this new novel which is good since the first ms totally needs to be rewritten!
I can honestly say this is the first time I’ve heard of a grape soda-induced dream. LOL I can’t even imagine. – Amanda

Do you listen to music or do you need a quiet place to write?
I have to write in silence. Normally the television is on but muted (still a distraction, I know). But music has definitely played a role in how some scenes I’ve written. There is actually a song by the band, Within Temptation called ‘See Who I am’ that is almost a theme song for my first novel.

Tell us about your book:

What is the name of it and is it part of a series or a stand alone novel?
My debut novel is entitled, Finding Monsters and it is the first in a growing series called Guardians of Esurack. I’ve completed drafts on the next two novels so fans won’t have long to wait for more. 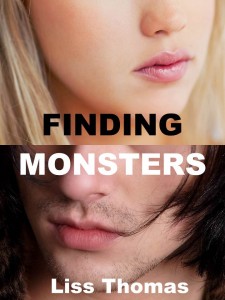 Where did the idea come from?
The idea came from a writer’s prompt. I first started writing it as a short story. It initially had a sad ending and when I asked my sister to read it, she refused and told me to make it a happy ending and then she would read it. So what started as a short story continued to grow until it became a full novel.
Your sister is a women after my own heart. All books should have happy endings. Real life has enough sad endings. 🙂 – Amanda

How long did it take to write?
It took about six months to write but the re-write took a few more years because I was learning more about the art of writing and looked for ways to improve my manuscript.

Where can we buy your books?
My debut novel will be available October 9th on Amazon.
An excerpt is available now at Amazon. – Amanda