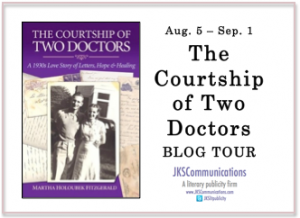 From a private collection of nearly 800 courtship letters, the daughter of two remarkable physicians has crafted a timeless valentine to long-lasting love and the healing profession. Senior medical students from New Orleans and Omaha meet in 1937 and begin a two-year correspondence across 1,100 miles. They set their sights on a return to Mayo Clinic, the medical mecca where they found each other and danced to the haunting Harbor Lights. Grave illness and career setbacks shake their confidence, but the two decide to face an uncertain future together, trusting in each other and the relationship they built letter by letter. The Courtship of Two Doctors recreates the medical era before antibiotics, when health workers were at risk of serious infection, and vividly illustrates the 1930s social barriers challenging two-career marriages.

The Courtship of Two Doctors is a book of selected letters from the late 1930s. Dr. Alice Baker and Dr. Joe Holoubek met during a summer Fellowship at the Mayo Clinic in 1937 and spent the next two years writing letters and making the rare phone call and visit until they could begin their life together in 1939. I read the entire Preface with tears in my eyes as Martha Holoubek Fitzgerald writes about her parents.

I love books like this because they are rich in history. I’m sure a medical professional would get much more out of the medical information the doctors share as they discuss their cases with each other, but I don’t know enough about current medicine to grasp any changes that have occurred over the past 75 years. The historical aspect I found fascinating was the mention of salaries and the cost of items. In 1937, Joe spent $3 a night on the hotel next to the Clinic. He later mentions paying eight hours salary, a whopping 25¢, on a movie back in Nebraska. And three hours salary on a glass of beer. Meanwhile, in New Orleans, Alice is spending 23 hours salary on a movie! Later, Alice calls her $10 monthly paycheck “huge”.

Other historical items I found interesting:

As for the letters themselves, I loved how they started out very shy, then became effusive in their affection for one another. It feels almost intrusive at times, when you can bring yourself out of the story long enough to remember that you’re reading real letters, and not a novel.  Both doctors write with humor and they are both so sweet, that I can’t imagine anyone around them not enjoying their company. I found it very touching that the first thing they would each do after ending a rare phone call is sit down and write a letter. They did the same after a visit. They would write letters on the train rides home. And they both kept mentioning the 1,103 miles between them. Not “1,100 miles”, not “more than 1,000 miles”, but a very precise 1,103 miles, as if every mile keeping them apart was important.

There is more to the letters than just romance. Joe liked to write about all the pranks he and the other students and doctors played on each other. Joe and Alice also talked quite a bit about their patients and the cases they had. I love that they shared a philosophy that most kids heal themselves if left alone. They don’t go into much detail about the cases, so even if you don’t like that kind of thing, you should still be okay. There is mention of a tapeworm, but if you read quickly, you can get past that part.

I got caught up in the letters and became anxious along with Joe and Alice as they tried to decide how to best carry on with their training and careers and still be together, and as they waited to hear from the places to which they had applied. Then I got swept away in their excitement as they were finally able to make solid plans for their marriage and a life together.

Author: Martha Holoubek Fitzgerald
Publisher: Little Dove Press
Release date: August 15, 2012
Pages: 400
Where I got the book: Free from the author in exchange for an honest review

Win your own copy:
US/Can only
One Paperback copy- NOTE (8/25): This book was packed during a move and I honestly thought it was a hardcover. I just dug it out yesterday, and it’s a paperback. If the winner entered before I changed this (I can see the dates of entry), he or she will have the option of receiving the paperback copy from me or receiving a hardcover purchased from Amazon.
a Rafflecopter giveaway

See the other tour stops HERE