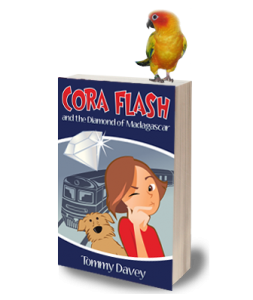 Book description:
Cora Flash is ecstatic when she finally convinces her mom to let her take a train ride by herself to visit a relative in the mountains. Once on board, Cora meets a cast of intriguing characters, and stumbles upon her very own mystery: A valuable diamond has gone missing, and only one of her fellow travellers could have stolen it. It’s up to our novice detective to solve the crime before the train reaches its destination – or the thief reaches Cora. This is the first book in the ‘Cora Flash’ series.

My review:
Cora Flash and the Diamond of Madagascar is a middle-grade book reminiscent of the old black and white mystery movies. Cora is excited to be taking her first train ride. In fact, she’s travelling alone for the first time, and she’s making new friends. Then a priceless gem disappears and everyone is a suspect.

This is a great MG book that any kid would love. It even has a cute dog. Cora is smart and entertaining. I loved her creative use of social networking. And we don’t even have to wait for the second installment in the series. Cora Flash and the Mystery of the Haunted Hotel has just been released!

I received this book free from the author through Novel Publicity in exchange for an honest review.

Wanna win a $50 gift card or an autographed copy of Cora Flash and the Diamond of Madagascar? Well, there are two ways to enter…

Tommy Davey spent his youth writing mystery stories and plays, and watching reruns of Three’s Company until every line of dialogue was permanently burned into his memory. When not writing, he enjoys traveling to favorite destinations including New York City and Paris, which he plans to feature in future stories. He lives in Toronto, where he was born and raised, with a Norfolk Terrier named Calvin. “Cora Flash and the Diamond of Madagascar” is his first novel. Connect with Tommy on his website, Facebook, Twitter, or GoodReads.

Get Cora Flash and the Diamond of Madagascar on Amazon or Barnes & Noble.