I haven’t posted a recipe in a long time, and after spending all day fighting with computers in one way or another, my brain is not up to writing a review, so you get a recipe! I know. It’s so exciting! Hey, try to keep it down over there.

As far as I know, this is my own creation. I cobbled it together from a Pampered Chef recipe and several recipes I found online (because I didn’t have the correct ingredients for any of the recipes). 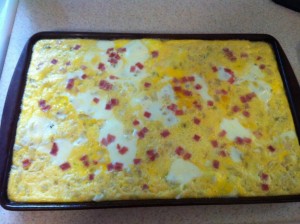 1/2 to 3/4 of a 32-oz bag of hashbrowns (I used the diced Southern tonight, but I’ve used Country style before with no problem)

2 tbsp butter (I use a non-soy butter substitute)

2 pieces of ham, diced (I use sandwich slices, but you can use leftover baked ham, or even cooked bacon if you prefer)

Preheat oven to 450°F. Spread hashbrowns to cover bottom of pan. I use the Large Bar Pan from The Pampered Chef. It’s approx 15×10, so if your pan is smaller, you may need to adjust amounts accordingly. For diced hashbrowns, I cook them for 15 minutes. Shredded potatoes will cook faster, so keep an eye on them and remove them when they start to brown. No longer than 15 minutes, if they make it that long.

While the potatoes are heating, melt 2 tbsp butter in a skillet. I just turn it on low and as soon as the butter is melted, I remove it from the heat. We’re going to put eggs in the skillet and we don’t want them to cook yet.

I use 12 eggs. If you’re using a smaller pan, you may want to leave out 2-3 eggs. If you’re pan has sides taller than 1 1/2 inches, you can probably go ahead and use all 12 eggs. Add the eggs to the skillet with the butter. Stir in one cup of milk. Make sure everything is mixed. You’re going to have some egg whites that won’t mix with everything else. That’s okay.

Cut up the ham or bacon. I just dice it on a cutting board.

When the hashbrowns are done (they don’t have to be brown or crispy), remove them from the oven. You should still have a base of potatoes at the bottom of the pan. (If they’ve moved, you just survived an earthquake, and you have more important things to worry about than uneven hashbrowns.) Turn the oven down to 350°. Pour the egg mixture over the hashbrowns. You shouldn’t have to do anything. Gravity should even it all out for you. If it is necessary to poke some potatoes down or something, just get a spoon and beat them into submission. (Just kidding. Take it easy on those poor potatoes.) Distribute the ham/bacon over the surface of the dish. I just randomly drop the pieces in until they’re spread all around.

Bake at 350°. Check after 15 minutes. If it’s still liquid, it’s not done yet. (Unless you want it a little runny.) Depending on your oven and the size of your pan, it may take a little longer. If so, I can usually go in 5-minute increments with no problems.

I don’t like to put cheese on until after it’s done cooking because the gooey cheese makes it harder to tell when the eggs are cooked. If you want to, though, wait until you only have a few minutes of cooking left. Cheese doesn’t need long to melt.

I make this for supper at least once a week, and my picky eaters love it. It feeds four of with about half left over.

Try it and let me know what you think.