You may have noticed (or not) that I skipped almost two weeks of this challenge. I was without internet for five days and I’ve spent so much time trying to catch up with everything, that I gave myself permission to just pick up where I am rather than trying to make up for all the days I missed. 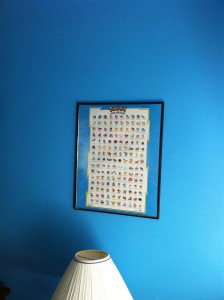 These days, my favorite color is purple, but when I was a kid, blue was my absolute favorite color. One summer, I went to spend a week with my aunt and uncle and came home to a newly-painted-blue room, new blue sheets and comforter, and blue curtains. That was pretty cool.

Now blue is Jeffrey’s favorite color. When he was four, he asked his dad if he could paint his room blue. At the store, he picked out Spongebob Blue. I guess it’s supposed to be an ocean blue or something, because Spongebob is actually yellow. So, in case you ever wondered what Spongebob Blue paint looks like, this is it. (That’s a Pokemon poster. The blue in the poster was conveniently the same shade of blue.)

Are you playing along? Feel free to leave your link in the comments below.