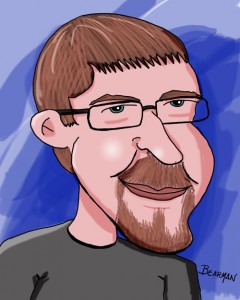 While author David M Brown is distracted from his writing, liking posts on Facebook and playing Angry Birds, one of his characters decides to do some exploring.

Wandering the Elencheran timelines, former war correspondent, now historian, Hawkswood, takes time out from his journey, landing on the pages of A World Apart, the second in David M Brown’s Elencheran Chronicles series, to chat with three of its protagonists – Demetrius, Eleyna and Halcyon. 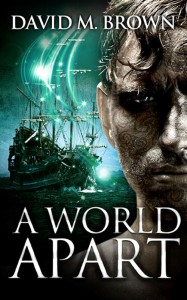 Hawkswood: So, tell us a little about you and A World Apart?

Demetrius: This is David M Brown’s second novel. He chose not to write about us in his first one. I’m Demetrius, a soldier in the Himordian army, but I grew up in Dove’s Meadow with Eleyna and Halcyon.

Halcyon: Beardy Brown was too focused on Fezariu with his first book. Fancy not wanting to write about us, eh? I’m Halcyon by the way, leader of our gang, at least when we were children.

Eleyna: I’m Eleyna and I grew up with Demetrius and Halcyon until Demetrius left town that is. That’s really when our story begins.

Halcyon: He wanted to join the army, you see, same as his grandfather – the great Granicus.

Hawkswood: Your family play a big part in this story, Demetrius, don’t they?

Demetrius: They do. Mr Brown begins with my grandfather and then tells the story of my father, Lacuna. They raised me together. I never knew my mother. My father wanted me to be a shepherd, my grandfather a soldier. In the end I chose the sword over the hills. Later in the novel there is my son, Janos, but things between us are not good.

Hawkswood: Families are always complicated. I’ve often found that friendships are easier. What of Eleyna and Halcyon? I understand the two of you meet some pirates?

Halcyon: Not just any pirates, the Black Iris and his crew on the Aeonian.

Eleyna: The Black Iris is the most feared pirate in West Elenchera. The colonists are terrified of him and the slaves yearn for the day he will come to their shores and release them from their bonds.

Halcyon: The Black Iris saved us. I made a foolish mistake that put Eleyna and I in jeopardy. The Black Iris was there when we needed him and we’ve been with him ever since.

Hawkswood: I hear this novel has pirates, romance, friends, adventure, families and magic in it. Are you happy with how David M Brown has written things so far?

Halcyon: I could teach Beardy Brown a thing or two about writing.

Demetrius: You should be more respectful, Halcyon. In essence I think Mr Brown has got to the heart of our story.

Eleyna: Demetrius is right, Halcyon. Mr Brown has our lives on the tips of his fingers. If you annoy him, you may be written out of the novel.

Halcyon: He sure has it easy sitting there behind his laptop. He should try living in Elenchera for a change. I reckon he’d wilt pretty quickly!

Hawkswood: We’d best move on before annoying our creator even more! So, the three of you are friends at the start of the novel, but by the end you’re enemies. What goes wrong between you?

Demetrius: We head down different paths. For me, it was the army and service to the Order. Nothing was more paramount in my life, not even my family or Eleyna and Halcyon. All is for the Order.

Eleyna: Halcyon and I went down another path, one that took us away from loyalty to the Order. We became pirates and began a new life at sea. We had no choice but in the end it turned out to be a good decision.

Halcyon: But then we attacked a town named Coratsia. We didn’t know it but Demetrius was stationed there at the time.

Demetrius: Because of the Black Iris and his crew I mistakenly allowed men, women and children to die in a fire. I wanted vengeance but instead the Order gave me chains. Years later they offered me freedom in exchange for hunting down and killing a new pirate – the Ivory Rose.

Hawkswood: So, Demetrius has to choose between freedom and the lives of his two friends. That’s quite a dilemma. I’d ask what choice you make but I’m sure you’ll not want to spoil it. Is there anything else you want to add?

Demetrius: Only that this novel is about three childhood friends that are inextricably bound and that bond is a hard one to break.

Eleyna: Mr Brown’s Elenchera is a hard place to live. The strong thrive and the weak perish. I think the novel reflects that.

Halcyon: Are we done? Excellent! Who’s for some Mizuansi before we resume our roles as bitter enemies?

Hawkswood: I won’t join you but thank you. I think I have what I need. I will look forward to hearing how it all ends.

Halcyon: Beardy Brown loves me so I’ll be around long after the end, mark my words. Hopefully Demetrius and Eleyna will be around too.

At this juncture, Hawkswood makes a quick exit from the pages of A World Apart, the scent of Mizuansi pervading the air. He nervously checks to see if David M Brown has started writing but the author is now on Twitter, mulling over his latest cat anecdote in 140 characters. Hawkswood leaves A World Apart behind and slips back into the Elencheran timelines.
It is another two hours before David M Brown starts writing, much to his characters’ annoyance!