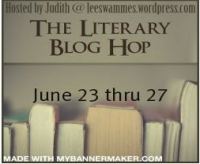 Welcome to the Literary Blog Hop hosted by Leeswammes’ Blog! Books in this hop will be from a variety of genres, but there will be no romance, supernatural or urban fiction or YA. You may also find book-related goodies or gift cards.

I’m giving away Genes, Giants, Monsters and Men: The Surviving Elites of the Cosmic War and Their Hidden Agenda by Joseph P. Farrell. I’m not sure how to describe this book, but it is pretty interesting. I didn’t finish it, though, because it just got too…intense, science-jargon-y…something. Reading started to feel like work. This giveaway is open to the U.S. only.

As horrifying as such possibilities are, Genes, Giants, Monsters, and Men sets forth a plausible theory revealing a hidden history of mankind and a possible reason that it has remained veiled for hundreds of thousands of years. With his well-documented style and breathtaking conclusions, Dr. Joseph P. Farrell pulls back the veil and takes the reader on an odyssey behind the mysterious history and myths of the human race.