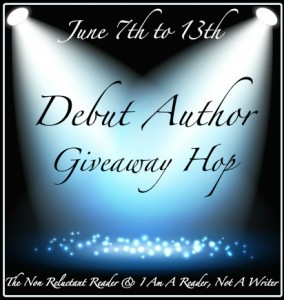 The Debut Author Giveaway Hop features books released in 2012 by new authors. Fortunately for you, I have an “in” with several awesome authors and two of them offered to give you their books! This drawing is open internationally.

Girl in the Glass

Description: “I will have to say it: ‘I am Anya and I am nothing’. I will look down at the floor as I say it, so that I don’t see the smile on my aunt’s face, so she won’t see the defiance in my eyes. She will get her victory. She always wins these battles. I know it, she knows it. But one day, one day she will not.”

In this Cinderella story for adults there is no fairy godmother and no handsome prince, just a girl of spirit and her strange companion.

Orphaned at the age of 10 in circumstances that she refuses to explain, Anya grows up trapped in the house of her abusive aunt where she and Eva, her Shadow, are treated as slaves. As her aunt tries to break her and the punishments become increasingly life-threatening, Anya struggles to find affection and self-esteem. When the inevitable showdown arrives, where will Anya find the strength to survive and escape? And if she does escape, what then? An arduous walk across an unforgiving desert to a city where an even worse danger lies.

Enfold Me – A Novel of Post-Israel

by Steven Greenberg – Winner gets a .mobi copy

Description: Written by an Israeli, Enfold Me is a provocative and dark journey into a chillingly-realistic post-Israel Middle East.

Precipitated by a massive earthquake and an Iranian-led attack, the fall of Israel rips Daniel Blum from his suburban life and scientific career. Alone and scarred, he endures subjugation and terror in Hamas-controlled Northern Liberated Palestine.

Now, Daniel must follow George Farrah, a figure from his past, deep under the Carmel mountain and through Egyptian-controlled, quake-ravaged Tel Aviv. Haunted by tragedy, Daniel strains the bonds of duty and family as he and George uncover a secret that could alter the region’s balance of power.