We were walking out the library when the wind picked up.
Bennett: It’s windy. Is it Wednesday? (I blame Pooh.)
Me: No. It’s Friday.
Jeffrey: You know, it should be really hot on Friday. [Think about it.] And we should all sit around on Saturday. And the sun should always shine on Sunday. I don’t know what to do about Monday. But on Tuesday, we should say everything twice. We should say everything twice.

You know when you blow on a baby’s stomach and call it a “raspberry”? Well my kids call them “cranberries”. No, I don’t know why.

Our homeschool group meets at a different park every week to play, so the boys are always asking me which park we’re going to. Last week, Bennett asked me, “Are we going to the park with the mango-round?”

We were at my uncle’s on Memorial Day, and the kids were all eating outside while the adults were inside. Jeffrey came in and told me that Bennett was sitting on his hamburger so the other kids would think he ate it. At least, that’s what I thought he said. When Bennett brought his plate in, with his all-but-gone hamburger bun on it, I asked him if he’d eaten his hamburger. When he told me he had, I asked him why he was sitting on his hamburger. In a very serious voice, he said, “Because, Mama, so the flies wouldn’t get it.” I suppose I should have figured that out myself.

Bennett just told me, “I took another bite of my vitamin drink.” 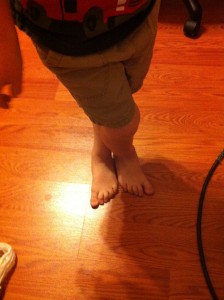 When you tell a kid his shoes are on the wrong feet, you can get a variety of responses. I know I do: “I don’t have any other feet” and “I don’t mind” are two I’ve heard here. Most recently, Bennett does this with shoes on and says, “Now they’re not wrong!” Or he does it without shoes and tells me, “My feet are on the wrong feet!”