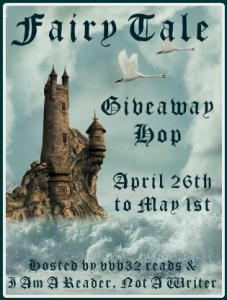 The Fairy Tale Giveaway Hop is is all about stories that are based (loosely or otherwise) on classic fairy tales. I’m giving away a signed paperback copy of Awake: A Fairy Tale by Jessica Grey. Awake is a fabulous twist on the Sleeping Beauty story. You can read my review here.

Jessica was kind enough to answer a few questions for us. (More than a few, actually. Look for the full interview later this week.)

Tell us a bit about yourself:
Hi, my name is Jessica and I am an author, fairytale believer, baseball lover, and recovering Star Wars fangirl. A life-long Californian, I recently moved to Montana with my husband and two children, where I spend my time writing, perfecting the fine art of toddler-wrangling, and drinking way too much caffeine.

Coke or Pepsi?
Coke. Hands down. I’ve been known to choose a restaurant over which soda product they serve. It was a huge shock to me when we moved to Helena and found out something like 70% of the places here serve Pepsi. It’s like I’ve moved to some alternate universe. I love Coca-Cola, but I’m making a huge push to only drink Coke Zero (the one with cherry, it tastes slightly better).

Did your book end up the way you intended?
Yes and no. I write by the seat of my pants a bit, meaning I am not much a planner or plotter. So while I have a general outline in my mind sometimes surprises occur. One of the biggest is the character of Becca, Alex’s best friend. When I first envisioned her she was kind of a shy, quiet girl like Alex…and then she showed up at Alex’s front door with a bright pink umbrella and a sassy attitude and demanded to be written a different way.

How long did it take to write Awake?
That is kind of a tricky question. I first got the idea for Awake seven or more years ago. I wrote about four thousand words for National Novel Writing Month in 2010 and then realized working full time and being a full time mom were not conducive to writing a novel in a month. I reopened the project in early 2011 and wrote the rough draft in under two months. However, the rough draft is just a starting place. Awake went through the editing process for months. I would say from start to finish (start being when I actually started really working on the rough draft), about eleven months.

Do you have any upcoming projects in the works or other books that have been published?
The sequel to Awake entitled Atone: A Fairytale will be released at the beginning of next year. It’s an adaptation of Beauty and the Beast and features Alex’s friend Becca as the heroine.

Enter to win here and jump over to Jessica’s blog for another chance to win a paperback copy of Awake.  Then come back and check out all the other blogs in the hop.