Jeffrey: Does glass turn back in to sand when it gets really cold?
Me: No.
Jeffrey: Too bad. That would be really cool. And kind of annoying. If it got really cold outside and all your windows turned into sand, your house would be full of sand and you’d be cold.

Jeffrey built a Lego man that he named “Lego Jeffrey”. I kept hearing really annoying noises from the other room, so I told Jeffrey to stop.
Jeffrey: It wasn’t me. It was Lego Jeffrey.
Me: Lego Jeffrey can’t make noises. It was you. Stop.
Bennett: Mama, you’re offending Lego Jeppy.
(I couldn’t make this stuff up if I tried. And he’s only *3*.)

Bennett is just starting to build Lego stuff on his own rather than asking Jeffrey or me to build something for him. On one hand, he hasn’t completely figured out that there are a finite number of Legos in the house because he thinks we can build everything in the little books all at the same time. On the other, he seems to understand it to some degree because he keeps taking Jeffrey’s creations apart to get the pieces he needs for his own buildings. We continue to have the “if you build it, you may take it apart; if Jeffrey builds it, you have to ask for permission to take it apart” discussion. Several times a day. Last night Bennett built an “amblance”, complete with a blue “siren” on top. If the siren is removed, the amblance will crash. This morning, he asked me to build him a “doctor pointment” (doctor’s office) to go with his amblance. He wasn’t pleased when I told him we didn’t have enough pieces to build something else that big unless we took another building apart. So he’s working that himself. 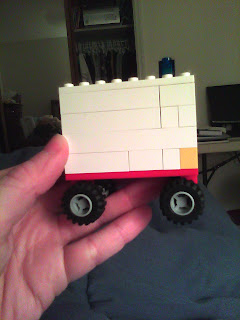 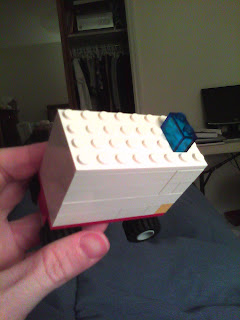