Today, Bennett had his first dental appointment. It wasn’t his first visit as he has been present for all of Jeffrey’s check-ups and several of mine. Jeffrey had an appointment at 11am today, and when we first got there, Bennett was excited and happy. Then Miss Julie (our hygienist) asked him if he was going to let her count his teeth later. Apparently, the answer to that was NO. He spent the rest of the Jeffrey’s visit standing with his face pressed against the hallway wall opposite the exam cubby. No, he wasn’t in trouble. I don’t do time-out. He just didn’t want anyone to talk to him and apparently he’s still in the “If I can’t see you, you can’t see me” stage. Of course, several staff members tried to talk to him, but he was having none of that.

So Julie and I were both thinking that his afternoon visit was going to be very interesting. His appointment wasn’t until 2pm, so we came home for lunch. (Got the car cleaned out, too. That was an adventure.) He was not happy when we left the house. When we got to the office, I reminded him that Miss Julie wouldn’t do anything that would hurt. As we walked into the cubby, he asked, “Are you sure it won’t hurt?”
﻿

We promised him it wouldn’t. It was supposed to be just a “get to know you” visit, but once he got settled in, he did so well that she went ahead and cleaned his teeth.

Julie asked him if he still let Mama help him brush his teeth. He said yes, and Jeffrey piped up and said, “I help him, too!” Bennett said, “Jeppy, too.” Then he exclaimed proudly, “I pee all by myself!” Because apparently, when you’re three, everything you do in the bathroom is connected. 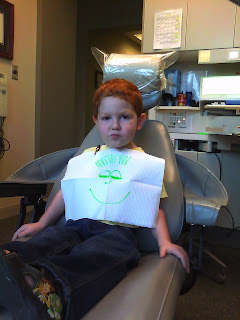 He did a fabulous job and as soon as we got in the car, they both started fussing and yelling at each other. Exasperated, I asked, “Why do y’all act so good when we go someplace, then get crazy as soon as we get in the car?” Bennett replied, “Because if we don’t have good manners, they’ll kick us out.”