“Know Me Better” is a weekly meme hosted by I Am A Reader Not A Writer. Each week five questions are asked as a way for your readers to get to know you better. Want to play along? It’s easy! Just click the link above to take you over to the host’s page. From there, copy and paste the meme image into your blog along with the meme code. Link back to the host and you’re done!

This week’s questions:
What’s your favorite season/weather?
Anything above 65 degrees with a light breeze.

PC or Mac?
I’ve only ever used PCs. I have an iPod, though. Does that count?

Favorite music?
On which day? Right now I’m listening to country, but I like a wide variety. No rap and no classical, though.

What TV show/movie/book do you watch/read that you’d be embarrassed to admit?
iCarly 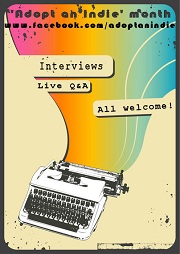 What do you think of when you hear “self-published”? If the first thing you think is, “Must not have been good enough for a REAL publisher to mess with,” then you’re missing out. I probably thought that a few months ago; at least I would have had I given it any thought at all.

Then I joined Goodreads, and when I still had time to participate in a few groups on there, I met a self-published author who was looking for people to review her new ebook. The description sounded good, the book was free, so I jumped in. I loved the book! And sat waiting impatiently while she finished the next book in the series. (Which I also loved.)

Since then, I’ve met authors on Twitter, Authors.com, and a couple of Facebook groups (Promoting and Socialising with authors and WoMen’s Literary Cafe). As far as I know, everyone on the groups (not Twitter, obviously) is either completely self-published, or they used a small press publisher. And I have read some amazing books. (And made some great new friends.) I’m not going to try to name names because I’m afraid I’ll leave someone out. But you can build your own list of new favorite authors.  “Adopt An Indie” Month is featuring a whole boatload of great authors, several of whom I’ve read. Some I haven’t read yet, but they’re already on my review list.

Before you discount the indie author, just think about the numbers. The big publishing houses can only publish so many books each year. There are thousands of super-talented authors out there. The overflow has to go somewhere. I’m just excited that the self-publishing industry has taken off the way it has. It opens up the playing field to so many more writers, which means even more books in every genre for us book freaks readers.

I’ve seen several book blogs that won’t review self-pubs. I can see why they wouldn’t. You don’t always know what you’re getting and when the author himself sends you the book, it’s much harder to write a less-than-glowing review. However, I haven’t found this to be an issue. I haven’t loved every book I’ve read, but I’ve liked all of them. I’m sure someday I’ll read one I really don’t like. If I find that there is no way I can write a review without crushing the author’s dreams, then I won’t write a review. I’ll email the author privately and gently share my impressions with him or her.

That’s another thing that I love about working directly with the authors: I can email (or DM on Twitter) them with questions or issues with the book. I don’t do it with every book, so don’t start calling me “that author-stalker chick”, but I would rather point out a continuity error or an unignorable (Yes, that’s a word. Now.) grammar error privately so the author can fix it, or at least be aware of it. Better that than seeing a reviewer pounce on them later for something that I could have helped them with. Try doing that with your favorite mainstream author.

Are there self-published books that are horrible and never should have been written? Of course. But that doesn’t mean that they all fall into that category. I haven’t found the overall quality of indie books to be any less than those from large publishers. In fact, I actually stopped doing reviews for one publishing house because their books were so horribly edited (we won’t even get into the content) that I refused to read anymore. I have yet to find an indie book that was so riddled with errors I couldn’t stand to read it. (BTW, I’ve read hundreds of books this year alone, most from large publishers, and I haven’t seen one yet that didn’t have at least one mistake somewhere. It happens.)

So, jump in now. Because when these folks are famous, I’m totally going to say, “I told you so.”