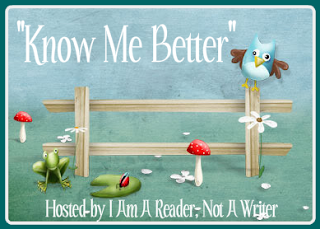 “Know Me Better” is a new weekly meme hosted by I Am A Reader Not A Writer. Each week five questions are asked as a way for your readers to get to know you better. Want to play along? It’s easy! Just click the link above to take you over to the host’s page. From there, copy and paste the meme image into your blog along with the meme code. Link back to the host and you’re done.

When you were little, what did you want to be when you “grew up”?
Which day? I wanted to be a ballerina, a teacher, a mom, a veterinarian, a writer, a farmer, a singer…

Black or White?
All I can think of when I read this is the Michael Jackson song.

You have won one million dollars what is the first thing that you would buy?
After the whole pay-off-debt thing, I’d take the family on a vacation then probably buy a lot of books.

Print or Ebook?
I love my Kindle, but I’m still a print-book girl.

This is the second in what is now a three-part series (I wasn’t happy with just two parts anyway). There seems to be some confusion about what I meant with my complaint about people “liking” books on Amazon when they haven’t read them yet. I’m not really sure what’s so confusing about that, but I felt the need to clarify anyway.

Seems some people think the Amazon like button is not there to tell people you actually like the book.  Maybe you just like the pretty cover or the great price.
What else would anyone seeing a “like” assume? When someone “likes” a status on Facebook, it means they agree with the status. When someone “likes” an blog post or news article, it’s because they like the content. In a society that has become accustomed to this meaning of “liking” something, seeing that a book on Amazon has 20 “likes” is obviously going to be influential. If I didn’t know about the “like-trades”, and I saw a book with 2 reviews and 20 “likes”, I would either think that something weird is going on, or I would think that there were a lot of people who read the book, and liked it, but didn’t want to be bothered with writing even a one-line review. I’ve never heard of someone “liking” a book on Amazon just because they liked the cover or the price. They do it because they like the contents of the book.

Why would tagging a book without reading it be okay if “liking” it isn’t?
Because tagging is actually relevant? If you have a book of sci-fi short stories by a certain author, it’s not a big stretch to tag the book “sci-fi”, “short stories”, “indie author”, and the author’s name. Nothing in tagging implies that you have read the book if you have not.

I’ve been accused of throwing indie authors under the bus.
(That wasn’t the exact phrase used, but I didn’t care for that one, so this’ll work.)
Really? If you follow me on Twitter (@4LbookBlogger), you’ll see that most of my tweets are actually RTs of indie authors’ tweets. I’ve already reviewed several indie authors on my blog and I have about 40 more books waiting for review. ALL from indie authors. When I review, I post not only on my blog, but on Amazon, B&N;, Goodreads, and GetGlue.com, so the books have more reviews and hopefully more exposure. I have a huge respect for indie authors, and I don’t see anything in my first post to make anyone think otherwise.

This is the second post in a three-part series about networking and growing a following online.
Part One: Are Reviews Useful?
Part Three: Networking and Community Online