I’m always learning from my kids. Like the other day on the way home from the library when Bennett informed me that dinosaurs “turn into bones”. How can you argue with that?

Apparently, everything can be fixed just by replacing the batteries. Including the computer that I turned off because of a storm and the oven that needs some stupidly-expensive piece replaced.

Of course, every time I stop for gas, Jeffrey asks,”Why do you need to get gas now? The car is still going.”
As long as you have gas and batteries, you can do anything.

Bennett (like all kids) asks a million questions. Usually some variant of “Why?” or “What’s that?” But not always. He has a tendency to ask questions that I’m pretty sure he already knows the answer to. Jeffrey did the same thing around that age. I can’t figure out if it’s because they didn’t believe me the first hundred times I answered them or if they’re testing me to see if I change my answers. In any case, after the first dozen times, I start repeating the question to them instead of just answering. It’s entertaining to hear the answers and much less frustrating. Bennett asked why it rains. I told him God makes it rain to water the trees and grass and plants so they’ll grow so everything is pretty and so we have food to eat. It’s summer and we’re in the South, so we’ve had thunderstorms almost every day for the past couple of weeks. Yesterday, we had this conversation:
B: What rain do?
Me: What does rain do?
B: It storms.

One day, he decided he needed to be carried. Since he weighs almost half what I do, I don’t pick him up unless I have a reason. He wrapped his arms around himself and looked like he was trying to pick himself up. “I can’t carry myself. Help me figure me out.”

Yesterday he told me, “I’m gonna get my secret recipe coffee,” and said something about milk and powder. (I don’t drink coffee and his dad drinks his coffee black, so I don’t know where he got that.) When he retrieved the toy coffee pot, however, the secret ingredients looked more like plastic french fries, chips, and lemons. I wonder if Starbucks would be interested in his recipe?

Have you noticed that kids these days expect to see pictures immediately? Every time I take a picture, Bennett says, “Let me see.” Sometimes he takes off to see the picture before I’ve even taken it, and I have to make him go back so I can actually get the picture. He even walks around with his play camera “taking pictures” and saying, “Look at you!” 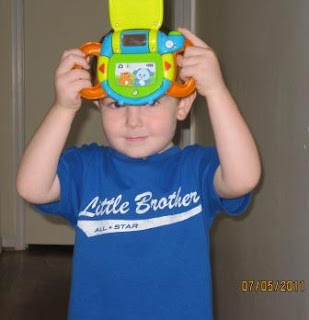 Over the weekend, he asked about an ambulance we saw.
Me: I don’t know why it’s there. Someone must be hurt.
B: It emergency?
Me: Yes.
B: I feel better.
Me: Yeah, you’re better now, so you don’t need a doctor.
It still surprises me, not only when he uses big words, but how his thought process works. Jeffrey spoke so well, so early, that it was like conversing with a short adult. Bennett is just now using long sentences (and is far from being grammatically correct) and while I know he’s intelligent, he hasn’t really been able to communicate it for long, so it sneaks up on me. He was worried about whoever needed the ambulance, but he was also happy that he was no longer sick so he wouldn’t need an ambulance or a doctor.

No matter how intelligent Bennett is, he’s still a two-year-old. Jay bought some Sparklers and we took the boys outside last night between dusk and the storm. Bennett has recently developed a fear of thunder. And fireworks. There weren’t many neighbors shooting fireworks last night, so it wasn’t really that loud. Bennett didn’t like it, though. He started crying, so I picked him up. He was really scared and upset, so I ended up taking him in. Then he wanted to go back out. Then we started hearing thunder and seeing lightning, though it wasn’t close yet. But he wanted to go back in. But of course, because Daddy and Jeppy were still outside, he wanted to go back out. “There’s thunder,” I reminded him. “I like thunder,” he told me. Huh. We went back out, but he wouldn’t get down and we had to stand way back in the carport right in front of the door. I’m not sure if it was so we could run back in if necessary or it was just because that was as far away as he could get and still see Jeppy. Probably both. Then the rain started, so we all came back in and watched the fireworks in Atlanta on TV. The end of them, anyway. They’d started them early to beat the storm. The station switched to the Macy’s fireworks display in New York. The good thing about watching on TV is that it’s much quieter and you don’t see as many spots in front of your eyes. The downside is that the colors aren’t as vibrant. Jeffrey enjoyed the show, but Bennett fell asleep in my lap. That would be another upside. I don’t think any kid has ever fallen asleep during a live fireworks display.