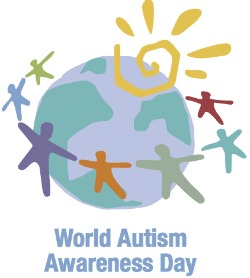 Today is World Autism Awareness Day. With so many sites out there that explain Autism Spectrum Disorders, I don’t think there is any point in re-writing what is already done so well elsewhere. I will provide links later so you can explore on your own.

It wasn’t long ago that the only person most of us knew with autism was Dustin Hoffman’s character in Rainman. Now, almost everyone has a friend or family member with a child with an Autism Spectrum Disorder (ASD). The current statistics say that approximately 1 in 110 children in the U.S. are affected by some type of ASD. This can range from Pervasive Developmental Disorder (PDD) to severe autism. This number is up 13% from the mid-90’s. We’re not sure what has caused the increase. From my reading, it seems to be a combination of things.

I never dreamed I would have a child with ASD. My cousin’s son has Asperger’s, but they live in another state, so I’m not around him much. So it was just on the edge of my radar. I knew it was out there, but it didn’t directly affect me. I knew nothing about it. One day, after my son said something during a visit, my cousin asked me if he has Asperger’s. Um, not that I know of. I went home and started researching and imagine my surprise when I realized he is almost a textbook case of Asperger’s. Inability to understand social cues, repetitive behaviors, intense interest in one or two subjects, poor motor skills, “little professor syndrome”, literal use of language. How did I miss this all this time?

All these years of family members thinking I should be stricter, strangers in the grocery store giving us dirty looks as he spins through the aisle, people implying (and some saying outright) that the reason he acts the way he does is because he’s homeschooled.  If I had only known. But I didn’t, and I’m not the only one. Since I’ve started my blog about Asperger’s and started talking to other parents, I’ve gotten several emails and facebook messages and talked to a couple of parents in person who have realized after hearing me talk about Asperger’s or reading the information I’ve posted, that their child has Asperger’s. And these are all older children,  not preschoolers. One is a 15-year-old girl who has gone through the school system without anyone ever saying anything. Either she’s a really good actress or none of her teachers have been trained in what to look for. None of these kids have been getting the help they needed because we didn’t realize they needed it.

Until we clean up our environment and food supply, the numbers are only going to get higher. So what can you do?