Jeffrey was making his Christmas list earlier today. Actually, what he was doing was circling about 75% of the toys in the Target toy catalog. One of the toys he wants is the Fisher Price Classic Record Player. Wait. “Classic”? I had one of those when I was a kid and I am NOT old enough for my childhood toys be called “classic”. *sigh* So, then I started thinking of the other toys we played with back then.

(Using the Amazon link so I don’t get in trouble for swiping the photo)
There was the Sit ‘n Spin, which allowed us to spin around really fast, because nothing says “fun” like yakking your lunch and/or walking into a wall.

The Rubics Cube, which taught us all how to cheat. Does anyone know more than one person who could actually solve that thing *without* taking the stickers off? 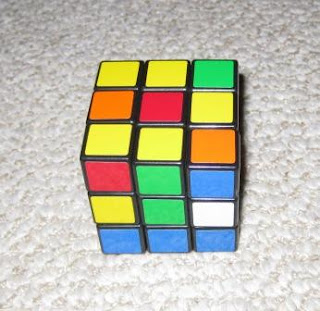 Ooh, Lite Brite! I have nothing bad to say about Lite Brites. What’s not to love? My kids have one now. 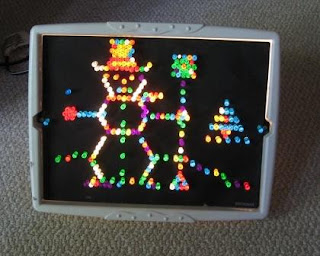 Remember the Tupperware block toy? You had to watch for pinched fingers, but that was hours of preschool fun. (Apparently, it’s called the Shape-O Toy. Did anyone even know that?)
There was the View-Master. I had disks with everything from Micky Mouse to The Seven Wonders of the World. Of course, just as often it was a “camera”.
I can’t forget the old phone my mom gave me to play with. It was just a old rotary desk phone that we didn’t need anymore after we got new-fangled push-button phones. I used to stick the end of the wires into the electrical outlet. I thought it was cool that I could hear the electrical buzz through the phone. We’re lucky I didn’t burn the house down. (Take THAT, Consumer Product Safety Council!)
Of course, I also had Barbies. (And I managed to actually keep up with the shoes… and if could have seen my bedroom then, you would know what a miracle that was.) My favorite Christmas present ever and my most-loved toy was probably my Barbie Dream House. Remember the fancy elevator mechanism? (For those of you not old enough to have had one of the coolest toys of the 70’s: It was a string that you ran over the top of the house and stuck in a slot in the floor on the opposite side.)
What were your favorite toys when you were a kid?